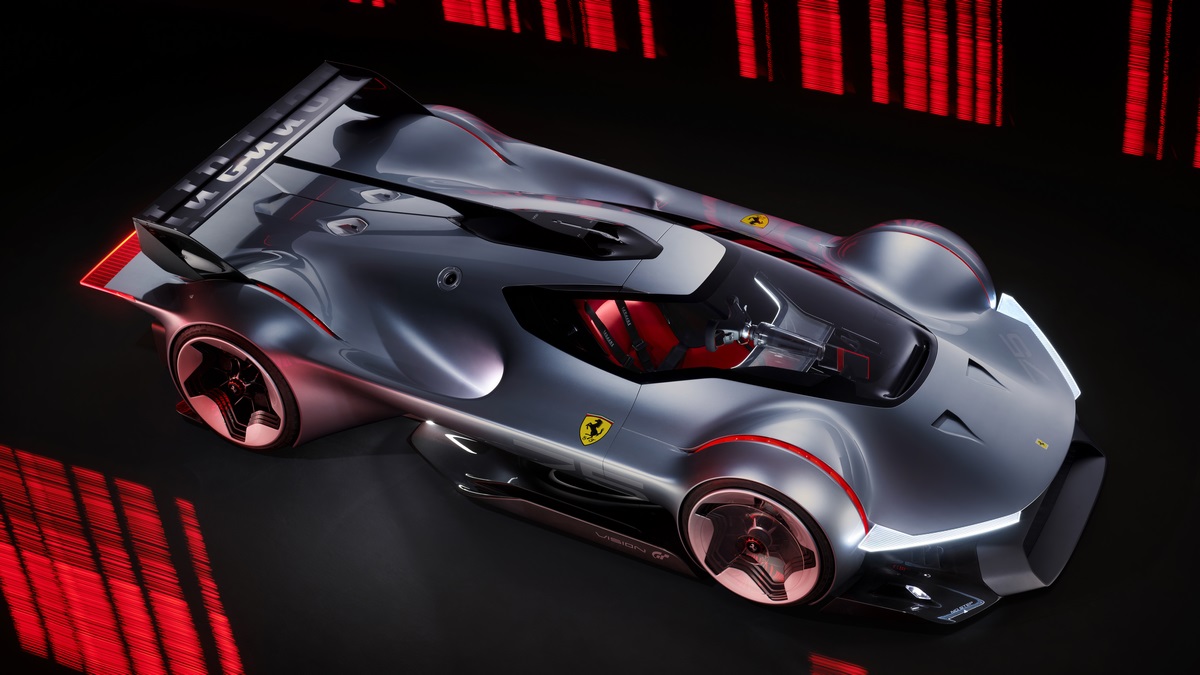 After a lot of news recently with the introduction of the hypercar to the FIA ​​WEC Championship and its return to the 24 Hours of Le Mans from 2023, Ferrari has revealed for the first time the Vision Gran Turismo concept for Gran Turismo 7.

It was one of the few manufacturers that did not develop a virtual world concept for Gran Turismo 7, and now Ferrari Vision Gran Turismo fills that gap.

The Ferrari Vision Gran Turismo aims to be a single-seater with covered wheels featuring a futuristic design. It is Maranello’s first concept car dedicated exclusively to the world of virtual motorsport. Its style draws on Ferrari’s unparalleled motorsports tradition, starting with the number 75 that juts out to the side and perfectly reflects its noble lineage.

The presentation of the Ferrari Vision Gran Turismo concludes the celebrations dedicated to the 75th anniversary of Ferrari: 75 years ago, the first Prancing Horse car, the legendary 125 S, left the doors of the Maranello factory.

The design of the Ferrari Vision Gran Turismo, created by the Ferrari Style Center under the direction of Flavio Manzoni, is inspired by the world of Ferrari Sport prototypes of the 1960s and 1970s that were hugely successful in endurance races such as the 24 Hours of Le Mans, won nine times by Ferrari. , and 24 Hours of Daytona, which puts them in future scenarios. 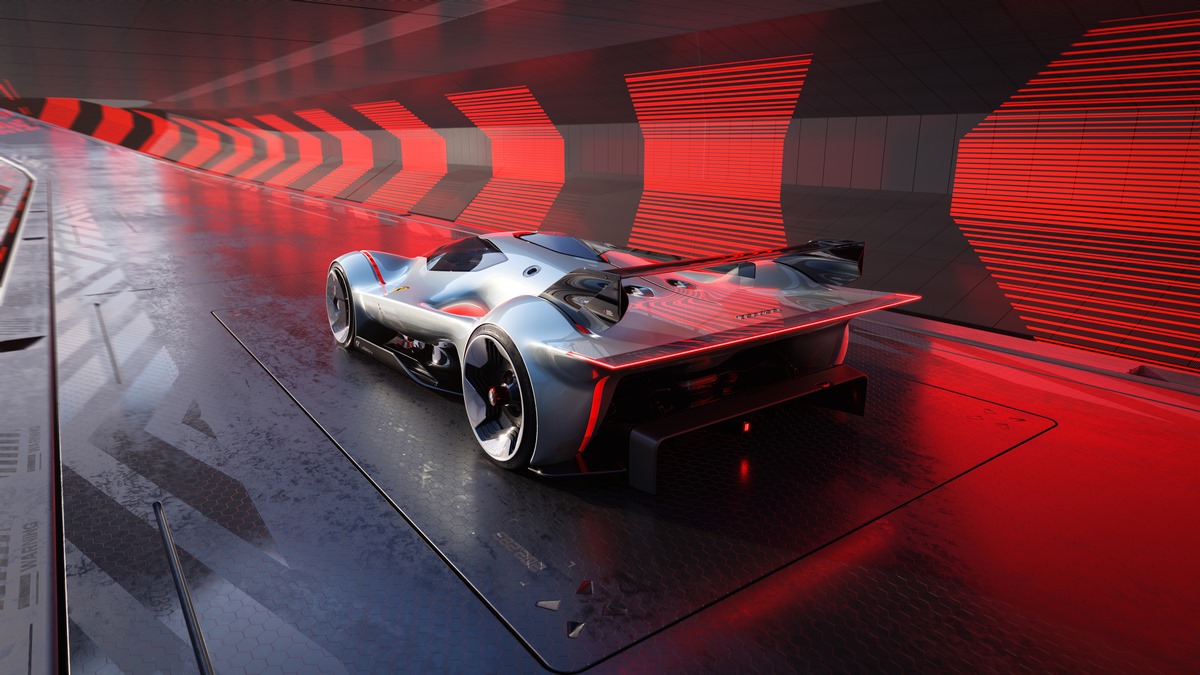 Its powerful and futuristic lines allow it to perfectly achieve its stylistic mission, which is to embody the DNA of masterpieces such as the Ferrari 330 P3 and 512 S, while being a tribute to the triumphant history of the racing world’s wild horses, anticipating future developments in covered racing cars. 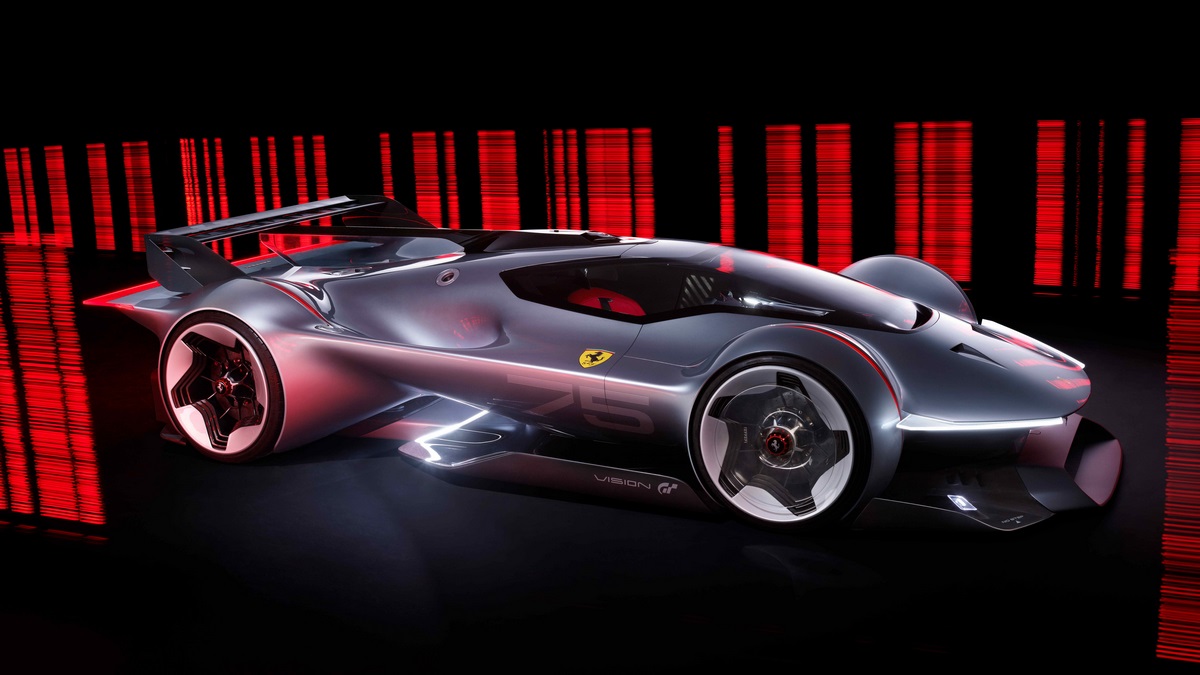 The design of the Ferrari Vision Gran Turismo is based on the idea of ​​a form of speed characterized by geometric lines, very steady and angular. This juxtaposition has a disturbing effect, because the plasticity of the external and internal surfaces is linked to the geometric rigor of the lines, and the architecture revolves around its aerodynamic concept, based on two imposing side channels.

These devices, patented by Ferrari, direct airflow from the front of the underbody around the passenger compartment and over the side bags. This solution makes it possible to obtain excellent aerobic downforce, thanks to the variation in the amount of movement and ground effect created by the central part of the lower body. The rear aerodynamics were developed using concepts inspired by those of the Ferrari 499P, in particular the aspirator and dihedral rear spoiler. The front duct and air vents integrated into the wheel arches enhance its aerodynamic efficiency and high-speed stability. 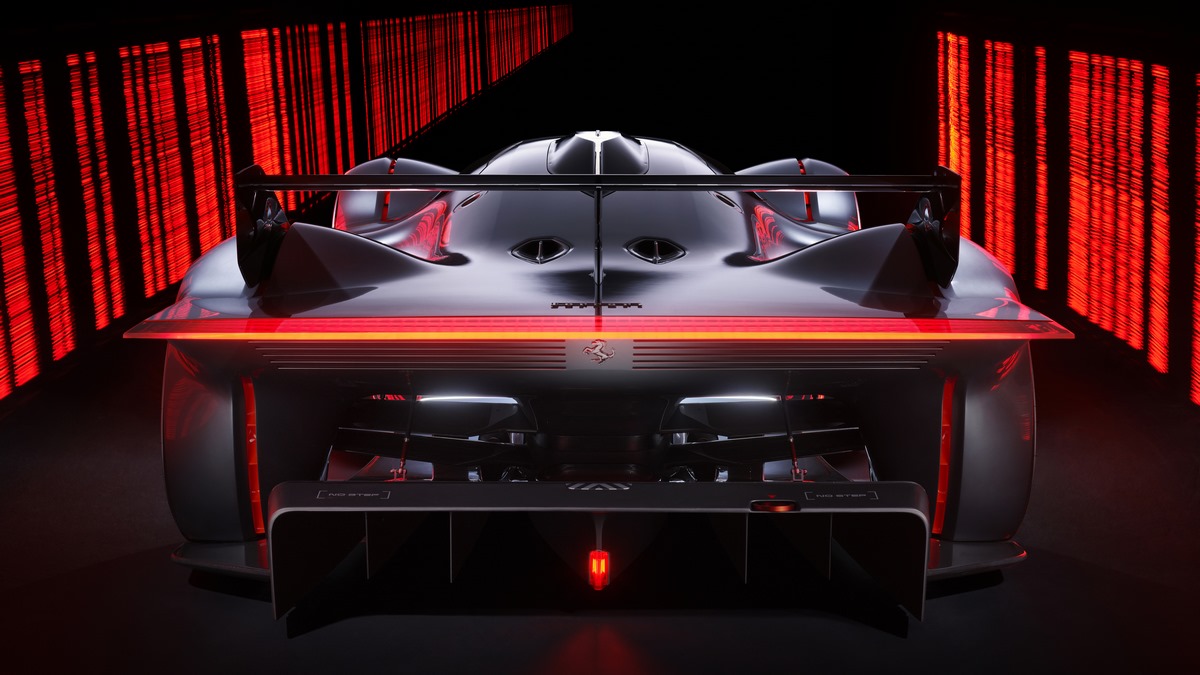 The heart of the famous Ferrari Vision GT…

The Ferrari Vision Gran Turismo is powered by a 3.0-liter 120-degree twin-turbo V6, the same engine found in the 296 GTB, 296 GTS, 296 GT3 and Ferrari 499B. However, in this case, the engine is free from regulatory restrictions and is developed with the sole aim of ensuring superior performance.

In this configuration, the engine is capable of delivering 1,030 bhp at 9,000 rpm, complemented by 240 kW (326 bhp) generated by three electric motors, one on the rear axle and one on each of the front wheels. The close collaboration between Ferrari and Gran Turismo has made it possible to reproduce the extraordinary sound of this innovative engine as faithfully as possible, providing players around the world with the most realistic driving experience. 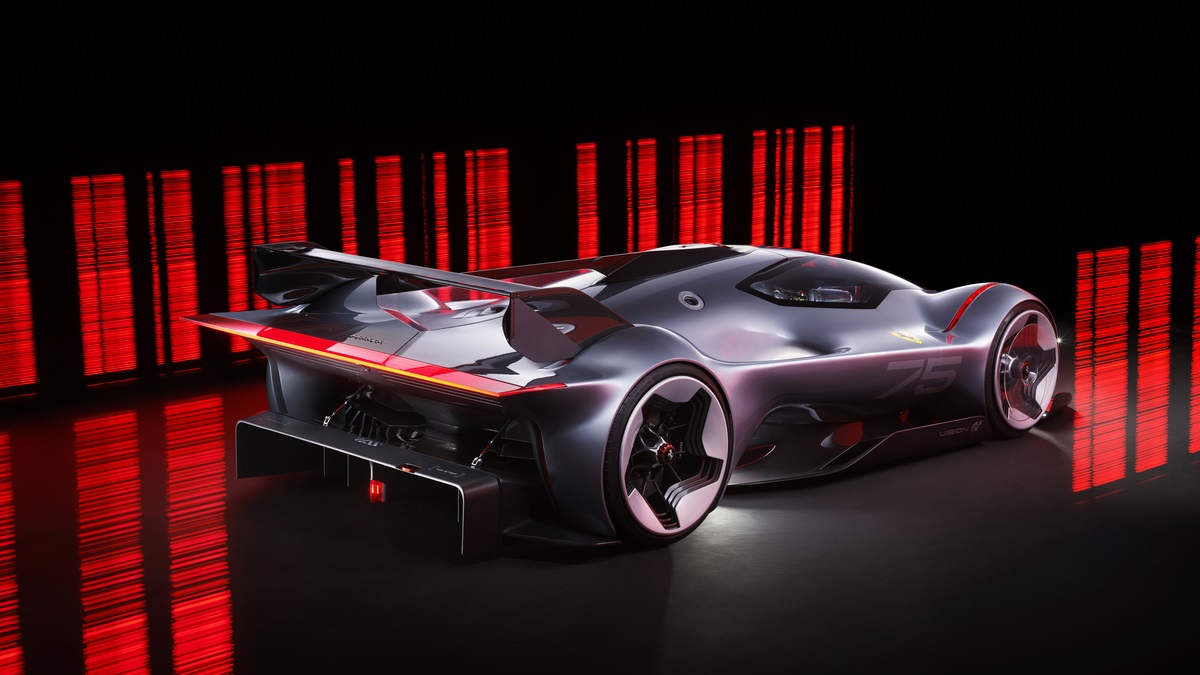 The chassis is designed to improve the lateral dynamics of the vehicle under severe driving conditions. The architecture of the powertrain ensures optimal weight distribution between the front and rear axles and an extremely low center of gravity in favor of the all-wheel drive system.

As stunning on the outside as it is on the inside!

The interior design creates continuity with the exterior design and is based on a pure and minimalist approach, ensuring maximum functionality and ergonomics. The dashboard lines are also simple and clean. Like the transparent rear window that frames and reveals the hybrid V6 engine, it favors advanced transparent materials through which we can see the mechanical components of the sophisticated steering wheel. The human-machine interface is designed to be intuitive and easy to use, allowing the driver to focus solely on the road. 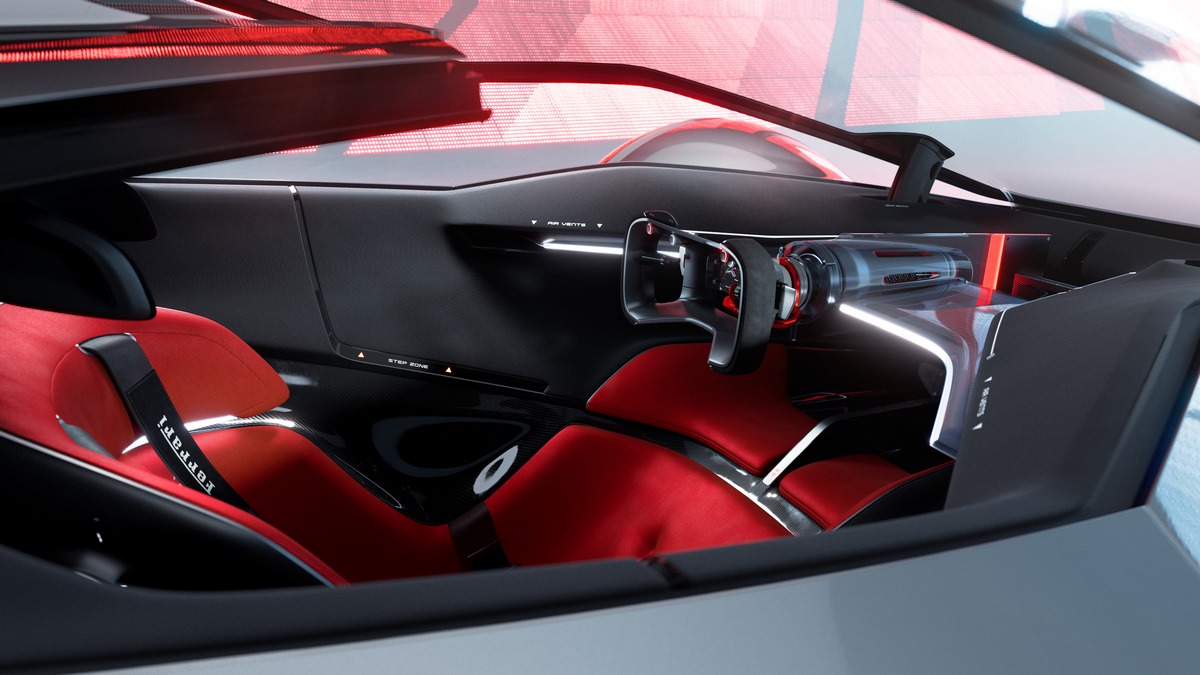 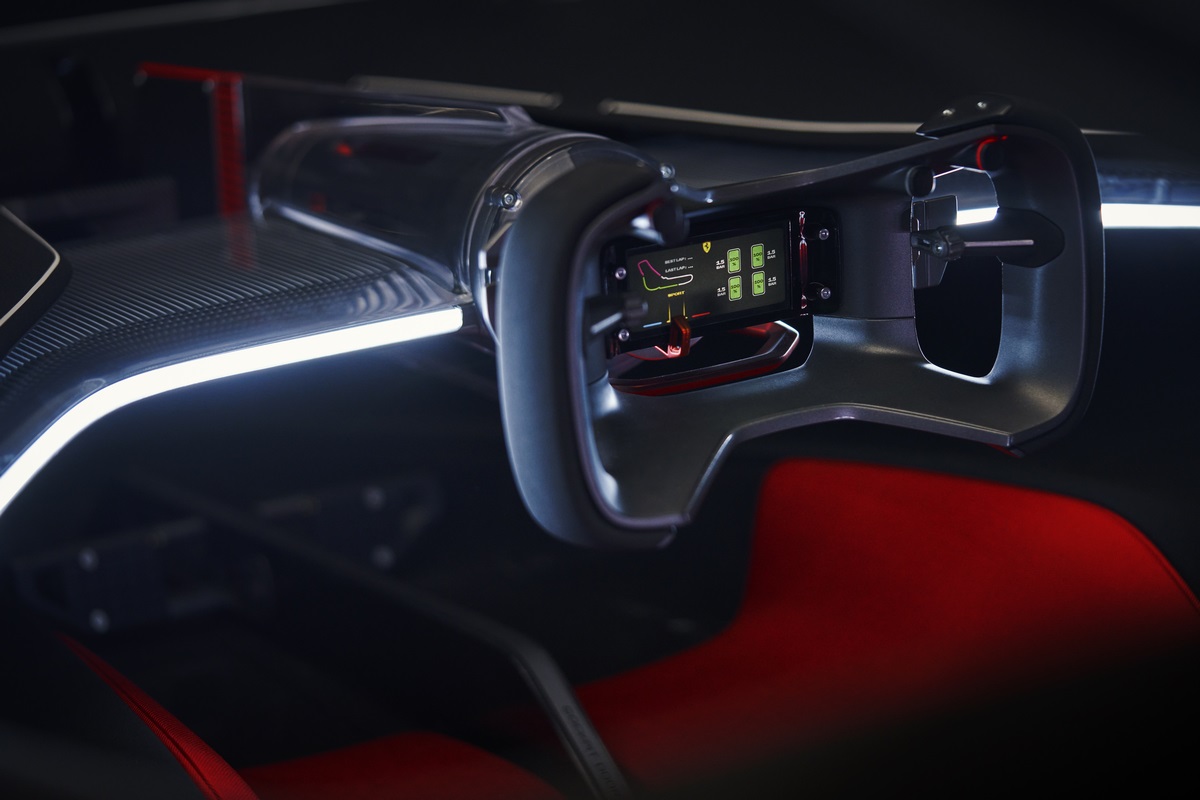 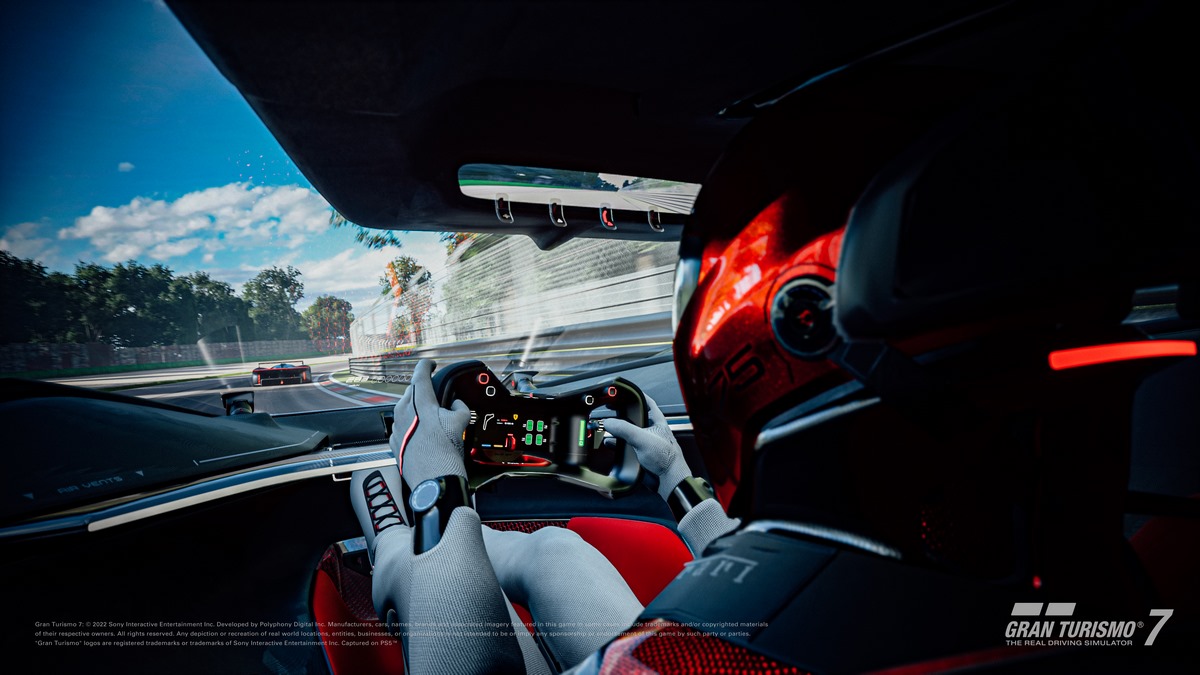 The Ferrari Vision Gran Turismo, revealed at the Gran Turismo World Finals taking place today in Monaco, will be available to all Gran Turismo 7 users from December 23rd.

However, once the presentation ends on November 27th at 7:00 PM, GT7 users will be able to participate in a quiz about the in-game Watch campaign. The winning entrant will receive a Ferrari Vision Gran Turismo as a gift on December 15, the date when the physical model of the car in 1:1 scale will make its debut at the Ferrari Museum in Maranello in the One-Off Prancing Horse space. The car will remain on display until March 2023. 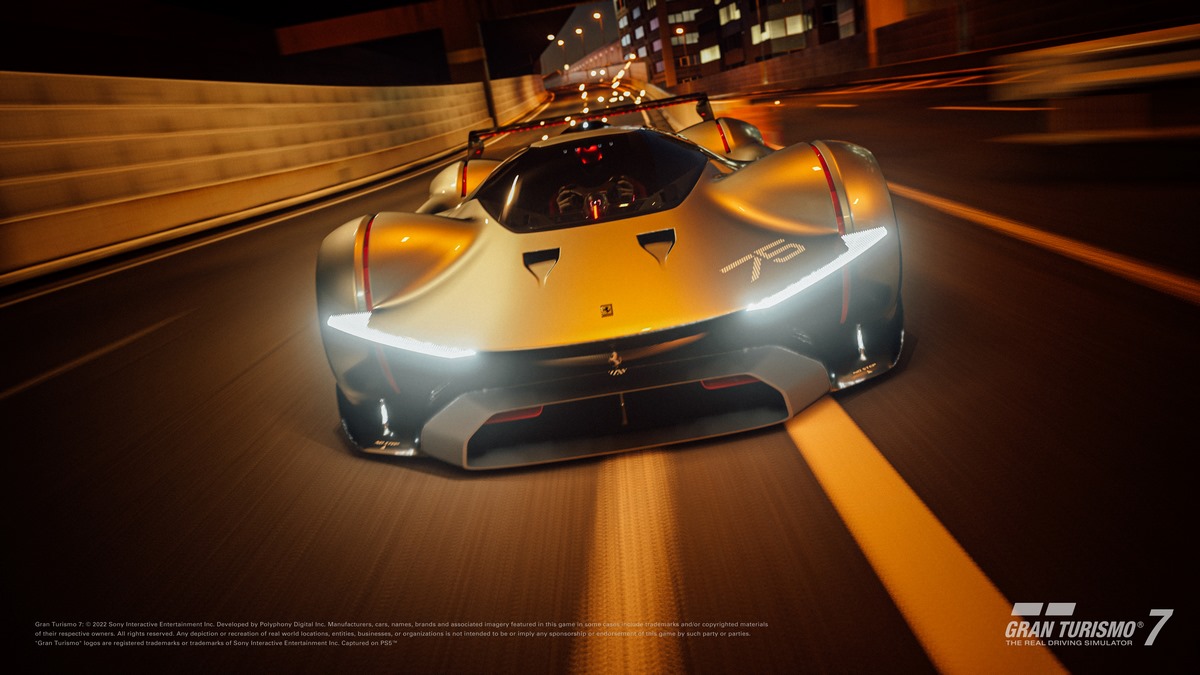 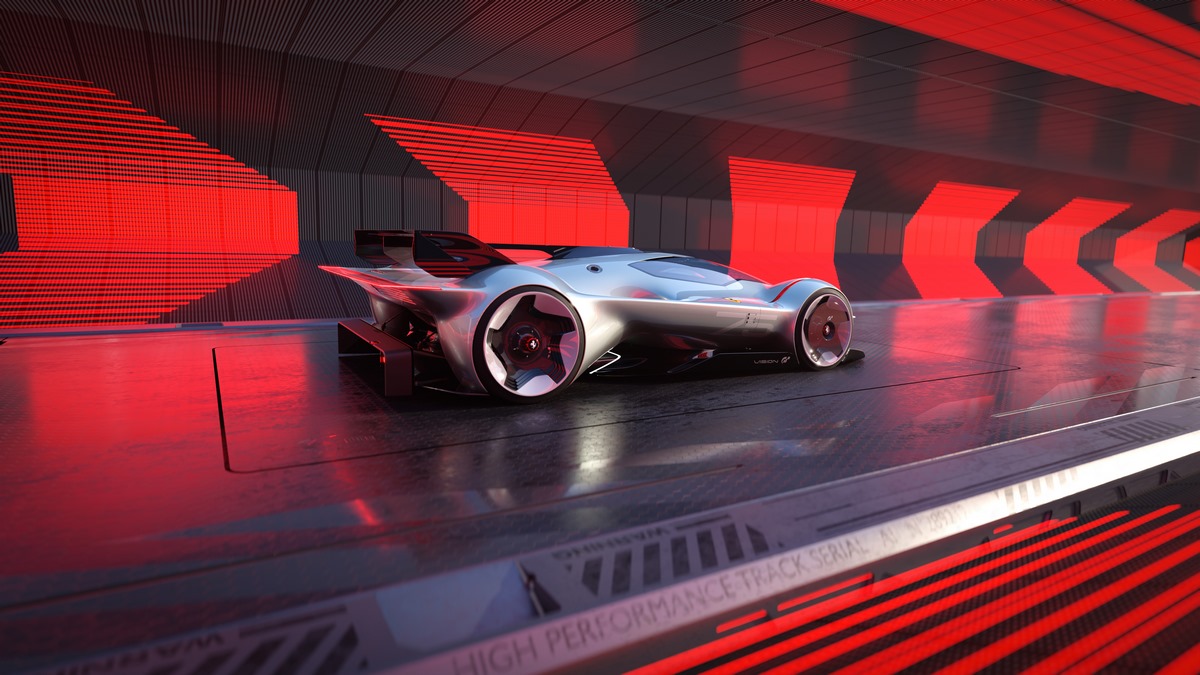