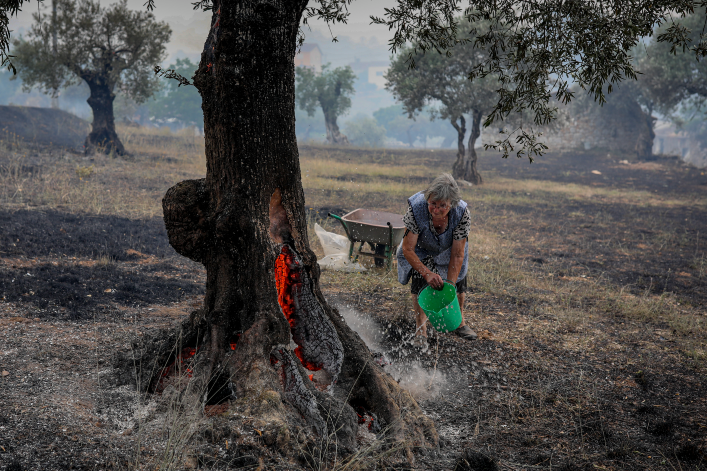 This is a double danger for southern Europe. In addition to being exposed to the scorching heat, many huge fires are spreading in Portugal, Spain, Greece and also in France where they have destroyed thousands of hectares in Cévennes or in the Gironde. These desolate scenes are increasingly unmanageable for firefighters as climate change will exacerbate these disasters.

That was in 2020 in Australia. Huge fires devastated the surface area of ​​Denmark causing “fire-breathing” clouds. Today, Southern Europe is being devoured by flames. In France, in the Gironde, more than 7,000 hectares of forest have burned. The situation remains unresolved as firefighters have been battling these fires since July 12th. “The fires are still not fixed, and unfortunately the conditions are similar to today’s wind forecast,” Commander Mathieu Jumin, spokesman for the Gironde fire brigade, told AFP. to landeras,We carry out tactical fires. Consisting of Burning plots of land to create virgin areas and limit the spread of fire.

Unfortunately, the Teste-de-Buch / Cazaux and Landiras fires are still active and have already burned 7,300 hectares, which is a very large area! (SDIS33) pic.twitter.com/xlvpHRbXZs

On Thursday 14 July, the “forest fire” in the Gironde turned red (scale of 4/5), a measure that had been imitated in the neighboring province of Landes since Friday morning. These fires, which did not result in casualties, broke out with the onset of the heat wave that has hit France since Monday, July 11, especially in the west and south. Gironde has been kept on orange ‘heat wave’ watch by Météo France, like ten other provinces. On Friday, the maximum will remain very high in the south with values ​​close to 38°C to 40°C, according to Météo France.

The fires were kindled by the scorching heat

A heatwave hit all of southern Europe exacerbating the fires. And in Greece, this battle against the flames led to two deaths on Wednesday 13 July when a helicopter crashed into the sea while trying to put out a forest fire on the island of Samos. In Portugal, whose center was devastated for a week by fires sparked by scorching heat, more than 2,000 firefighters are still mobilized to fight in particular against four still active homes across the country. In one week, the fires destroyed about 13,500 hectares, according to data available on the European Forest Fire Information System (EFFIS) website.

Video: A car drives into a wildfire in central Portugal.

More than 2,000 firefighters are battling four major fires and a sweltering heat wave across the country.

In June, 96% of Portugal was classified as experiencing either a ‘severe’ or ‘extreme’ drought. pic.twitter.com/g7bJ87ve2P

In Spain, the most alarming fire has already destroyed at least 4,000 hectares in a mountainous region that stretches across the regions of Extremadura and Castile and León, near Portugal. Several smaller fires broke out in Italy or Croatia, according to the European Copernican system. In the Iberian Peninsula, which had been facing stifling temperatures for several days, the thermometer reached extreme values ​​for the second day in a row, with a peak of 45°C recorded at 5 pm near Avila, in the center-west.

The device can crack with climate change

As scientists remind us, scorching and fiery summers will gradually become the norm. It is becoming increasingly urgent to adopt climate change adaptation policy commensurate with the challenges. The head of the fire department, Gregory Allioni, called for the urgent strengthening of the firefighting system in France, which is threatened by global warming. “We will have to prepare ourselves moreBecause the device can crack “If we are hit by a large number of flames breaking out at the same time over the territory”He told AFP.

However, this is not the path taken by France. As journalist Juliet Noel recently pointed out on Linkedin, in just 8 years, nearly all of the major national public operators whose mission is to adapt to climate change have suffered staff cuts. -20% for Météo France, -16% for water agencies, -12% for the National Institute of Geographical Information and Forestry … However, according to the Institute for Climate Economics (I4CE) today, France is not well enough equipped to adapt to heat waves, fires and floods . France will have to invest at least €2.3 billion a year to catch up.