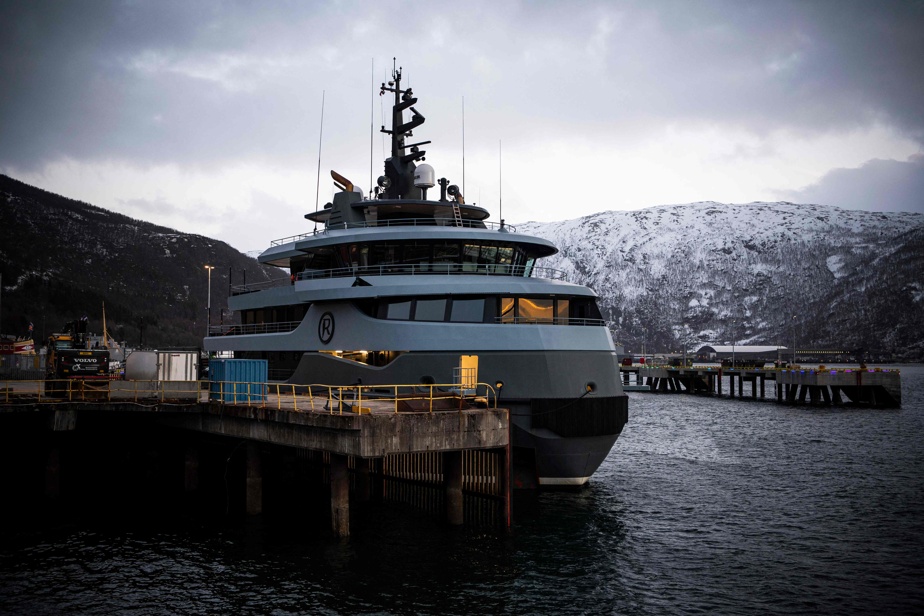 (Narvik) In Ragnar Does the anchor finally weigh? The super-luxury yacht, frozen in the Arctic, owned by a Russian oligarch, a former KGB officer, may have found some fuel that Norwegians rejected weeks ago in response to the war in Ukraine.

The majestic ship exploded in the port of Narvik, a small town in northern Norway. With its overturned bow, and helicopter platform, somewhat like matryoshka dolls, this other large boat resting on its aft deck, its dark gray figure contrasts with the image of cargo ships that have come to load metal.

But it is the identity of its owner above all that makes it a local curiosity: the 68-meter yacht, which will house a whole host of other rides (amphibious boats, jet skis, underwater robots and snowmobiles, giant toboggan, English pub…), belongs to Vladimir Strjalkovsky, according to various specialist websites.

Having become extremely wealthy after a juicy period at the helm of giant mining company Norilsk Nickel, the 67-year-old businessman is said to have ties to Vladimir Putin, with whom he served in the KGB in Saint Petersburg, when the city was still standing. It is called Leningrad.

If he was not on the list of Russians targeted by European sanctions after the invasion of Ukraine, his supposed proximity to the head of the Kremlin is terrifying.

when Ragnar Needed to refuel in Narvik where he stopped on February 15, no one there wanted to sell him fuel.

I do not sympathize with the behavior of the Russians in Ukraine. Why should we help them? said Sven Holmlund, manager of a local supplier.

“Let them row the house. Or they raise the sails.”

Unable to return to her home port of Malta, the yacht has been ordered to remain at mooring for five weeks now.

The captain of the yacht, a former Royal Marine, lost his British composure.

In a note registered with the port, Rob Lancaster said he was “very disappointed by the double standards” of his Norwegian hosts who agreed to supply Russian fishing vessels but not the yacht he was piloting, at the helm of an all-Western crew, which he claims does not know the owner.

According to the superyacht fan site, the Ragnar was put up for sale for €69.5 million ($96.5 million CAD) in 2021. But there is no indication that it has been changed.

The case is an embarrassment to the Norwegian authorities, which have acceded to almost all the sanctions adopted by the European Union, but are generally reluctant to anger its powerful neighbor Russia.

There is no question of seizing the yacht as France and Italy did since Mr. Strzhalkovsky is not among the sanctioned figures.

Unwilling to openly encourage suppliers to change their positions, Norway’s Minister of Fisheries, Bjornar Skieran, appeared to be sending signals in this direction.

“We can all agree that the best thing today is that the yacht can continue on its way,” he told NRK.

According to the chain, a supplier has finally agreed to sell 300,000 liters of diesel, which will be allowed to leave on Tuesday.

In the port of Narvik, an oil tanker is waiting near Ragnar and it appears that the crew of the boat, which will include 16 people, is in full readiness, according to AFP.

But the tongues hardly decompose.

Only a Briton, apparently holding management positions, agrees to answer some questions curtly.

Leaving on Tuesday? At first no. why ? Mysterious fuel filling problems. It is impossible to know more.

“This whole situation is ridiculous,” he says.