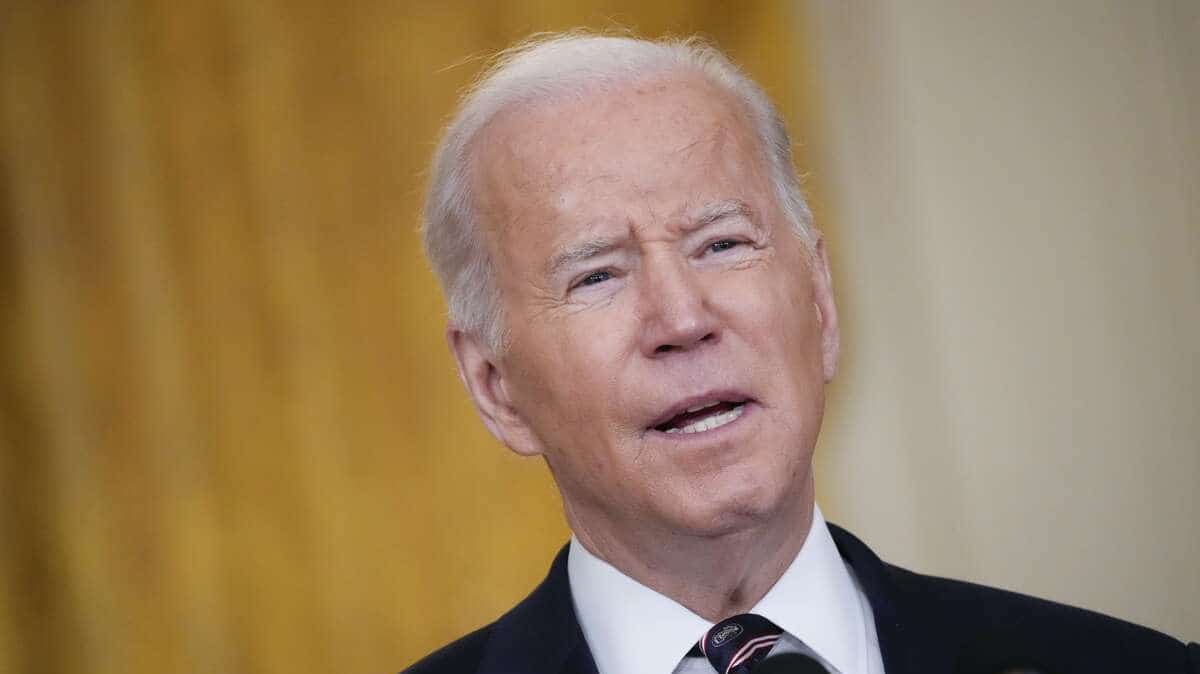 Joe Biden on Tuesday called Putin’s order to deploy Russian troops to two breakaway regions of Ukraine “the beginning of an invasion,” and unveiled a series of sanctions in response.

• Read also: The specter of a Russian attack on Ukraine is growing

• Read also: Ukraine is running out of options against Putin

• Read also: The world responds to Putin’s declaration on Ukraine

After a cautious initial reaction a few hours after Vladimir Putin’s speech on Monday, Washington raised its tone on Tuesday.

“This is the beginning of an invasion,” Joe Biden shouted during a speech at the White House. He warned that Vladimir Putin was “developing justifications to go much further.”

The president, in response, announced that the United States would immediately impose a “first batch” of sanctions that would cut Russia off from Western funding. “We are imposing wide-ranging sanctions on Russia’s sovereign debt,” he said.

It also targets the financial sector: “total ban” sanctions have been imposed on financial institutions VEB, the Public Development Bank and PSB.

The US president also decided to punish the Russian elites and their families. “They share the ill-gotten gains of the Kremlin’s policies and they also have to share the pain,” he said. Head of Russian Intelligence (FSB) Alexander Bortnikov is on the list.

By decree, Joe Biden already on Monday evening banned any new investment, exchange or financing by American persons into, from, or within the pro-Russian regions of Donetsk and Lugansk. But these regions already have very limited relations with the United States.

As if to dismiss any accusation of too timid reaction, spokeswoman Jen Psaki insisted Monday that sanctions on the dossier would be added to “quick and tough” economic measures prepared by Washington and its allies in the event of an invasion. .

The United States, for example, has already threatened to cut off Russian banks’ access to dollar transactions, and to ban the sale of American technology to Russia.

A senior US official warned that “no Russian financial institution is immune” if this invasion continues.

He said export controls that would cut off the flow of high-tech components into Russia are also a “key part of our potential sanctions,” describing the measures as “really strong because we’re talking about an important technology that Russia needs to diversify.” its economy.”

Joe Biden is under pressure from the American political class to respond firmly.

Influential Republican Senator Lindsey Graham, who called Moscow’s maneuvers a “declaration of war” — a move the White House has not taken — called on the United States to “destroy the ruble,” Russia’s currency, and “crush Russia’s oil and gas sector.”

But the US president called that “there is still plenty of time to avoid the worst-case scenario that will cause enormous suffering to millions of people,” reminding that the United States does not give up hope of finding a diplomatic way out.

We will judge Russia by its actions, not by its words. Whatever Russia does next, we are ready to respond with unity, clarity and conviction. I hope the diplomatic channel remains open.

The United States, which is often accused of being alone in international issues, has promised to work “closely” with its European partners on this issue.

Joe Biden also allowed the redeployment of US forces to the Baltic states, in Estonia, Latvia, and Lithuania.

Keen to show his support for Kiev when tensions are at their height, the president also met with Ukraine’s diplomatic chief to “reconfirm” his support.

The United States also wanted to welcome the transatlantic sanctions against Moscow, in particular Berlin’s suspension of the controversial Nord Stream 2 gas pipeline license, which Washington has long denounced.

Joe Biden said on Tuesday that he “worked with Germany (to ensure) that Nord Stream 2 does not go forward, as it promised.”

The senior US official said the suspension would “liberate Europe from Russia’s geostrategic grip over its natural gas supplies,” calling the Berlin declaration a “major turning point.”