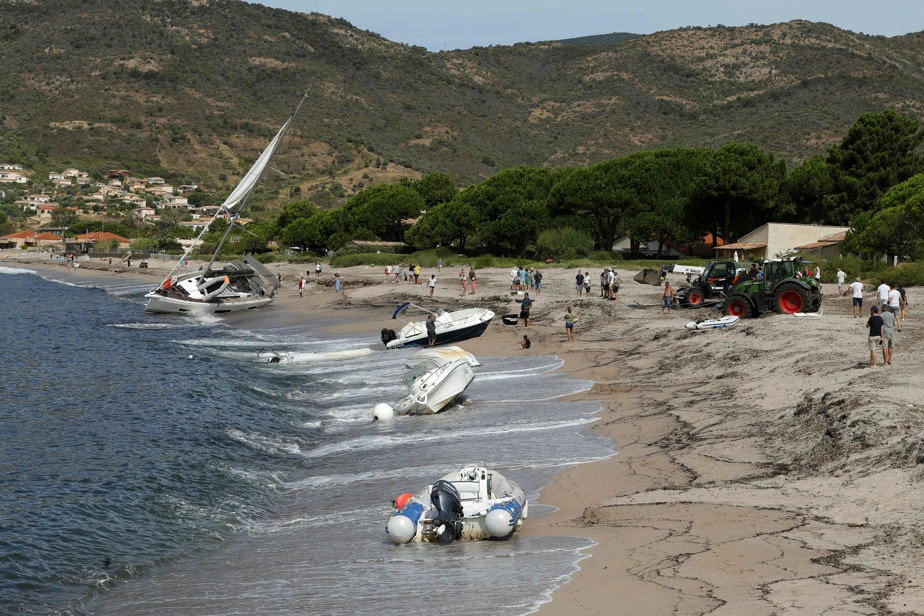 (Sagouni) – Violent storms that hit the French Mediterranean, after weeks of drought, left five dead and several injured, Thursday, in Corsica, Meteo-France, warning of new dangers of rain and thunderstorms at night.

The Mediterranean island, where tourist season is in full swing, will be on orange alert again from 9 p.m. to 10 a.m. Friday. A mid-afternoon storm also broke out in Ajaccio.

Severe thunderstorms, accompanied in the early morning by gusts of winds up to 224 kilometers per hour, killed five people.

At the end of the morning, the Prefecture of Hot Corse had already announced the death of a 46-year-old man in Calvi (Hot Corse), the victim of a tree falling on his home.

In the Corse du Sud, a 13-year-old girl also died after a tree fell on her small house in a campground in the village of Sagon.

Shortly after the deadly storm, tourists left this camp site with their bags and suitcases, many of them in shock, an AFP photographer noted. An Italian woman said she wanted to put a candle to thank God for saving her life: a tree fell two meters from her tent.

The prefecture said a 72-year-old woman died on Liamone Beach in Cogia, Corse de Sud, after a thatched roof of a hut fell on her car.

On the ground, 12 people were infected, in Hauts-Cours-e-Cours-de-Suds, of whom three are in an absolute state of emergency. Among them is a 23-year-old Italian woman, who was also the victim of a tree fall in the Calvi pine forest.

“take off the boat”

In Sagun Bay, Benjamin Rowe, 26, told AFP he “wake up around 7:30 a.m. because of a very strong storm” that cut off the electricity and the telephone network.

This tourist was diving Thursday morning, “and the observer had not expected this storm at all.” He went to Liamone Beach, where the septuagenarian lost her life, and saved “people on a boat that ran aground and exploded on shore.”

The five passengers of the boat slept 200 meters from the shore, he said, “they did not see the height of the sea.” They managed to get out without injuries. They are destroyed.”

Several rescues at sea were still underway Thursday across the West Coast.

“The vast majority of these operations are for landings, boats that have returned or are in distress, and whose mooring has been disrupted,” according to a spokesperson for the Maritime Prefecture, who lamented the “dozens injured” on different boats. But without the need to share prognosis.

Julian Sechelle, 36, a lighting designer, on vacation in Borgo (Haute-Corse) with his wife and 18-month-old daughter, was surprised by the speed of the phenomenon.

“I went out this morning, it was barely raining. After a few minutes, it was pouring rain, and the wind hit very hard. By car, it was complicated to ‘parking on the road’.”

Interior Minister Gerald Darmanin flies to Corsica in the afternoon at the request of President Emmanuel Macron, who has given his “all his support” to the island’s chief executive, Gilles Simeone.

Strong thunderstorms on Tuesday and Wednesday, accompanied by torrential rain, hit southeastern France, putting several sections of them on orange alert, but damage remained very limited on the continent despite accumulated rainfall of up to 123 mm in Loureau, a village in Herault.

At a time when many French regions are on drought alert and affected by fires, these rains have moistened the soil, a particularly positive effect in fire prevention even if it is still too early to gauge the impact on water prices.

In neighboring Italy, two people were killed Thursday, eighteen were injured and one hundred were evacuated, during a storm that tore down trees and roofs in Tuscany, according to the Italian region. Local media said the two dead were victims of falling trees.