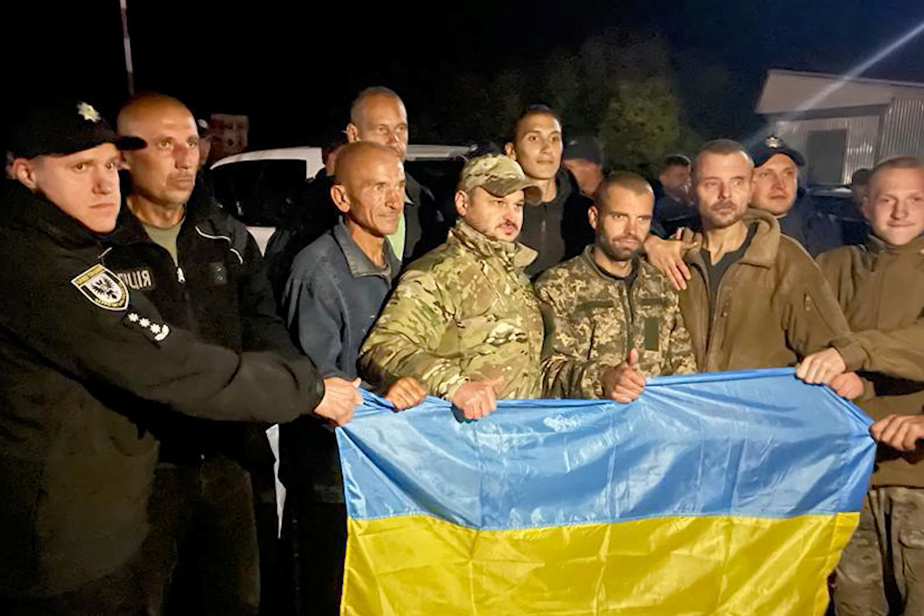 (Kyiv) Ukraine and Russia carried out a military prisoner exchange, the largest since the offensive began in late February, and the announcement comes after Vladimir Putin mobilized hundreds of thousands of reservists to resume his offensive in Ukraine.

Kyiv in particular recovered 188 “heroes” who defended the Azovstal steel plants in Mariupol, a symbol of resistance to the Russian invasion, and this southern city – including 108 personnel of the Azov Regiment. Ukrainian President Volodymyr Zelensky said five military leaders, including defense chiefs from Azovstal, had been transferred to Turkey.

The Ukrainian head of state said that they would remain in this country “in absolute safety and in comfortable conditions” until the “end of the war” under the terms of an agreement with Turkish President Recep Tayyip Erdogan.

In his daily speech, Mr. Zelensky said that Russia has recovered 55 prisoners, including former MP Viktor Medvedchuk, who is close to Russian President Vladimir Putin, accused of high treason in Ukraine.

He pointed out that ten prisoners of war – including five Britons and two Americans – were transferred from Russia to Saudi Arabia earlier today in the framework of an exchange announced by the Saudi diplomacy between Moscow and Ukraine, among this exchange.

The announcement comes a few hours after the partial mobilization order for reservists issued by Vladimir Putin, which sparked impromptu demonstrations in at least 38 cities in Russia and the arrest of at least 1,332 people. These are the largest protests in Russia since the one that followed the announcement of the Russian attack on Ukraine.

On the UN podium, US President Joe Biden directly attacked Russia, a permanent member of the Security Council, accusing it of “shamelessly violating” UN principles since its attack on Ukraine.

After Vladimir Putin threatened to use nuclear weapons, the US president insisted: “A nuclear war cannot be won and must not be waged.”

A few hours ago, in a speech to the nation, Putin said that he was ready to use “every means” of his arsenal against the West, which he accused of wanting to “destroy” Russia. “This is not a hoax,” he stressed.

Speaking via video link at the annual United Nations General Assembly on Wednesday, Zelensky demanded “just revenge” against Moscow, strongly denouncing the invasion of his country by Russian forces, and called for the creation of a special court to try Moscow “for its crime of aggression against our state.”

“We will not let this entity overpower us,” he said, and said the word “punishment” no less than fifteen times.

New British Prime Minister Liz Truss pledged Wednesday evening at the United Nations General Assembly that the United Kingdom will continue to provide military aid to Ukraine until its victory over Russia.

“We will only be calm when Ukraine wins,” she asserted, saying that by decreeing the mobilization of reservists, Mr. Putin was “trying to justify his disastrous failure” in Ukraine.

Europe has described this mobilization as an “acknowledgment of weakness” from Moscow, whose army has suffered setbacks in recent weeks against Ukrainian forces.

An emergency informal meeting of EU foreign ministers was held Wednesday evening in New York on Ukraine. The head of European diplomacy, Josep Borrell, said immediately afterwards that the EU was considering imposing new sanctions on Moscow after the mobilization order.

Borrell said EU ministers had adopted a statement “strongly condemning the recent Russian escalation”. “We will continue to increase our military assistance and study new restrictive measures” against Moscow.

Following a meeting a little earlier devoted to the safety and security of civilian nuclear facilities in times of armed conflict, the foreign ministers of Germany, Canada, France, Italy, the United Kingdom and Ukraine, as well as representatives of South Korea, the United States, and Switzerland “strongly emphasized in a joint statement that Russia’s seizure of the power plant The nuclear weapons in Zaporizhia and its militarization (was) the root cause of today’s threats to nuclear safety and security.”

“We remember that the increased risk of a nuclear accident will remain dangerously high as long as Russia is present at the Zaporizhia site,” they said.

Ukrainian authorities accused Moscow of bombing the site of the Zaporizhia (southern Ukraine) power plant, the largest in Europe, on Wednesday.

The Director-General of the International Atomic Energy Agency, Rafael Grossi, warned that the situation at this plant “continues to deteriorate.” “We cannot afford to wait for something catastrophic to happen,” he added.

Taking care not to announce a general mobilization, which millions of Russians fear, Putin issued a “partial” decree on Wednesday, a measure he deemed “urgent and necessary.” According to Russian Defense Minister Sergei Shoigu, initially 300,000 reservists were affected.

As a sign of concern for many Russians, airline websites were hacked after Mr Putin’s speech and an online petition against mobilization has already collected more than 230,000 signatures.

More than 1,300 people have been arrested in anti-mobilization demonstrations according to OVD-Info, an organization that specializes in counting arrests.

“Everyone is afraid. I am for peace and I do not want to shoot. One of the demonstrators in Saint Petersburg, Vasily Fedorov, a student with a pacifist crest on his chest, said: “

Tuesday’s announcement of annexation “referendums” in Moscow-controlled areas of Ukraine, from September 23-27, signaled a hardening.

Russian military doctrine states that nuclear strikes can be resorted to if territory considered Russian is attacked, which could be the case with annexed areas.