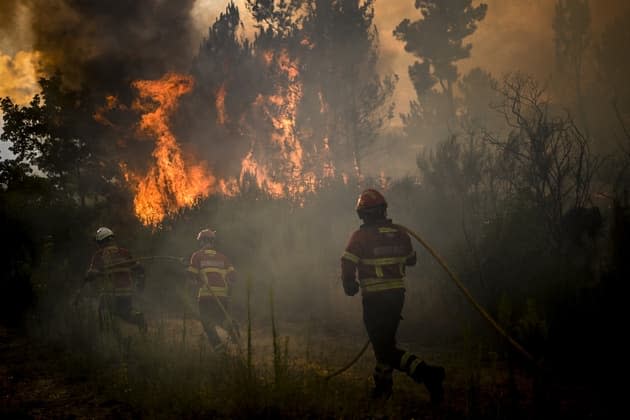 burning smell One of the major forest fires in Portugal He arrived in Madrid on Tuesday, Spain’s rescue agency said, as the two countries battle the fires.

“We received many calls on the Madrid system 112 from citizens concerned about the smell of burning and smoke: it is a fire in Portugal,” the city’s emergency services wrote on Twitter, the Madrid region (112) receiving 380 calls.

Europe has been hit by drought and heat wave

A satellite image, released by emergency services, shows a plume of smoke spreading over 300 kilometers, the distance between Portugal and the capital of Spain. Countries suffered from drought and heat waveIt struggles hard against large forest fires.

The Serra da Estrela fire, which is already the largest this summer in Portugal, has burned about 15,000 hectares, according to the latest provisional data from the Portuguese authorities.

This fire, declared on August 6 near Covilha (center), destroyed unique forest areas in this UNESCO-recognized park, in the heart of the Serra da Estrela mountain range and culminating at an altitude of about 2000 metres.

As the Civil Protection Command comes under fire for its handling of operations, Portuguese Interior Minister Jose Luis Carneiro on Monday pledged to begin assessing the “structural causes” and “way of fighting” against the fires “as soon as the Serra da Estrela fire is out.”

More than 15,000 people have been evacuated

In the Spanish province of Alicante (Valencia, southeast), 10,000 hectares have already burned The fire, which spread after lightning struck the Val d’Epoux on Saturday evening, has not been brought under control. The authorities said that more than 15,000 people had been evacuated.

Also, in the Valencia region, between 11 and 13 passengers were injured, three of them seriously, when the train they were traveling in found itself in the center of another fire, according to the authorities.

“Three of them suffered serious burns,” the Valencia region’s health department said, adding that one had been evacuated by helicopter. He added that there were also “between 8 and 10 minor injuries”.

Spain was also affected by the fires

In the Spanish region of Aragon (northeast), where more than 6000 hectares have burned, firefighters seem to have managed to repair the fire.

In Spain, Wildfires were three times more destructive in 2022 About the whole of 2021, when smoke was emitted on 84,827 hectares. Portugal, which is experiencing an exceptionally dry month this year, had its hottest month of July in nearly a century.

Since the beginning of the year, smoke has risen there on about 81 thousand hectares, the largest area since the deadly 2017 fires that killed 100 people, according to the latest report from the Institute for Nature and Forest Conservation.