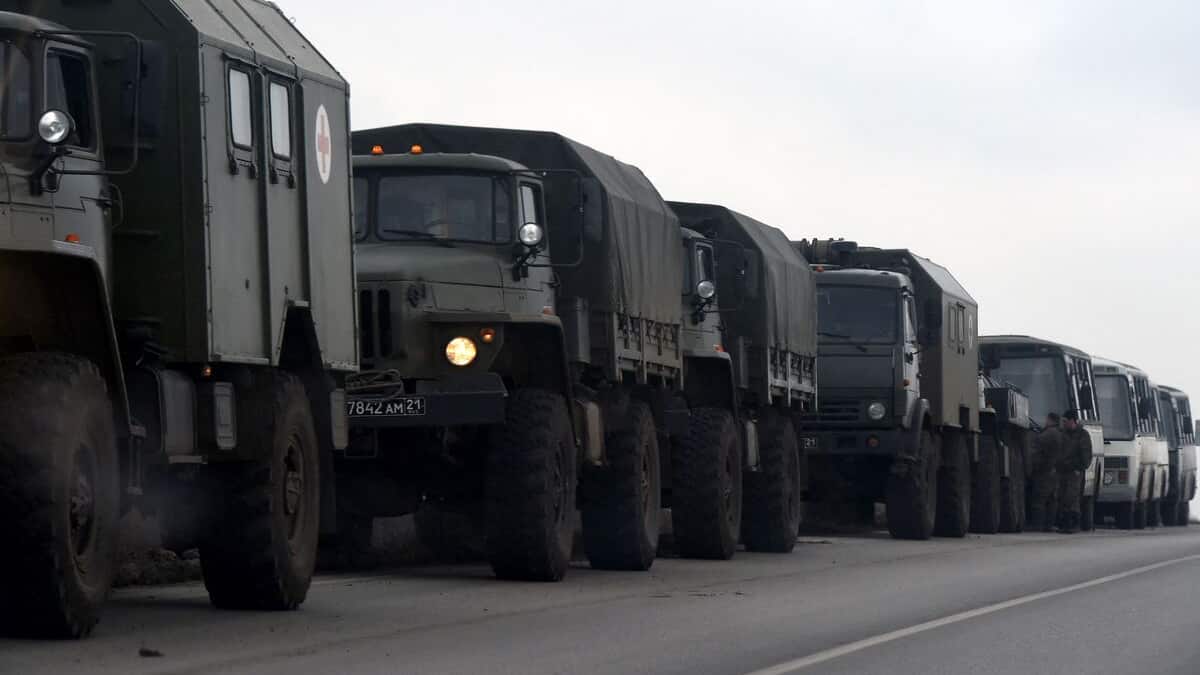 The Kremlin announced from Wednesday night to Thursday that it had received a call for help from pro-Russian separatists to “repel” the Ukrainian army, in another indication of a possible Russian military intervention in Ukraine despite sanctions and international protest.

• Read also: Secretary-General warns that the world is facing a ‘moment of danger’

• Read also: Economic sanctions: what are the consequences for Russia?

During the day, Ukraine mobilized its reserve soldiers between the ages of 18 and 60, voted on a state of emergency and announced that it was the target of a new “massive” cyber attack targeting official websites, while more than 150,000 Russian soldiers, according to Washington and Kiev, are deployed on its limits.

A senior US official said Wednesday that President Vladimir Putin is ready to invade his neighbor, with “nearly 100%” of the necessary forces in place.

United Nations Secretary-General Antonio Guterres warned at the opening of a meeting of the United Nations General Assembly that the world was “at a moment of danger”.

Ukrainian deputies voted by a large majority in favor of declaring a state of emergency requested by President Volodymyr Zelensky, and Secretary of the National Security and Defense Council Oleksich Danilov, denouncing on this occasion “political aggression from Russia.

Zelensky had previously said: “Ukraine needs clear and tangible security guarantees immediately.” He added that “the future of European security” was at stake in Ukraine.

Overnight, the Kremlin announced that the leaders of the pro-Russian separatist “republics” in eastern Ukraine had asked for “help” from Vladimir Putin to “repel the aggression” of the Ukrainian army.

The Russian state news agency TASS published messages to this effect on February 22, that is, Tuesday, the day Russian parliamentarians authorized Vladimir Putin to deploy the army in Ukraine.

On Wednesday, Russia began evacuating its diplomatic staff from Ukraine, and the Russian flag no longer flies over its embassy in Kiev. The United States had already closed its doors.

The Russian president had written a little earlier that Russian interests were “non-negotiable”. On Monday, in an angry speech, he questioned the legitimacy of Ukraine’s existence, accusing it of being a tool in the hands of NATO’s anti-Russian policy of aggression.

At the international level, an emergency summit of the leaders of the 27 European Union countries on the Russia-Ukraine crisis will be held Thursday evening in Brussels. The French presidency stressed that this meeting should show that we are “united”.

Meanwhile, US President Joe Biden announced sanctions against the company responsible for operating the Nord Stream 2 gas pipeline, which connects Russia with Germany, which Berlin had already suspended.

The day before, he had already taken public action against Russian banks and the ruling oligarchy, denouncing the beginning of the Russian “invasion” of Ukraine.

Vladimir Putin, who has set the pace since the crisis began in December, recognized on Monday the independence of the pro-Russian separatist “republics” of Donetsk and Lugansk, and then the next day got the green light from the upper house of parliament. Deployment of Russian forces.

While these decisions lay the foundations for a major intervention on the ground, no major troop movement has been reported.

In the Russian Rostov region, about fifty kilometers from the border, Russian troops are present in large numbers: military trucks, rocket launchers and howitzers, without any signs of specific activity, according to AFP correspondents.

Many fear that the crisis will lead to the most serious conflict in Europe since 1945.

Washington and its Western allies imposed the first sanctions in response to the separatists’ admission that Kiev has been fighting for eight years, a conflict that has killed more than 14,000 people so far.

If Berlin freezes the giant Nord Stream 2 gas pipeline project, Biden, for his part, announces the “first tranche” of sanctions to prevent Russia from raising Western funds to pay off its debts.

Moscow, for its part, promised a “strong” and “painful” response to the Americans.

These measures remain modest compared to those promised in the event of an invasion and Moscow can boast that it has amassed nearly $640 billion in foreign exchange reserves and $183 billion in a sovereign fund to deal with them.

On the front, the resumption of fighting between the army and separatists in recent days did not stop on Wednesday. The belligerents continue to regularly exchange artillery fire, accusing each other of this. The killing of a Ukrainian soldier is the ninth since January.

Luhansk separatists also announced the death of a fighter on Wednesday. A civilian was also killed in the bombing at night, according to the rebels.

The US ambassador to the United Nations, Linda Thomas Greenfield, warned Wednesday that Russia’s intervention could lead to a “new refugee crisis” with “up to five million additional people displaced”.