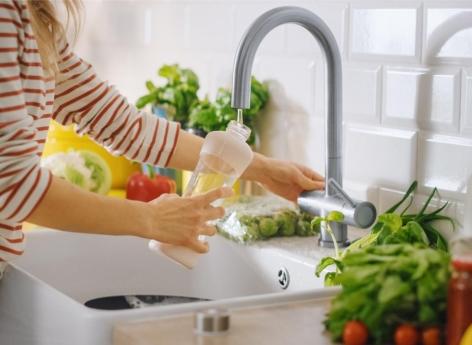 What happens in a bottle of water in 24 hours? Lots of things when they are made of reusable plastic. Two scientists from the University of Copenhagen observed the formation of water when stored in these plastic containers. The results are published in Hazardous Materials Magazinesurprised them. “We were surprised by the large amount of chemicals we found in the bottled water after 24 hours, Jan H. Christensen, co-author and professor of chemistry, explains. There were hundreds of substances in the water – including substances not previously found in plastic, as well as potentially harmful substances.You are.”

Imitate normal use of reusable bottles

The scientists used three types of water bottles for their study, all sold in Danish stores. Two of the bottles are made of biodegradable plastic, according to the manufacturer. The researchers tested new squash, and some are very much in use. The goal was to imitate the way it is generally used. “People often drink water that has been stored in bottles for several hours”The authors say. Regular tap water was stored in new and used bottles for 24 hours, before and after going through the dishwasher, then for some, rinsed well with tap water afterwards.

More than 400 substances have been discovered in water

Christensen and fellow researcher Selena Tesler discovered more than 400 different substances from bottle plastic and more than 3,500 substances derived from dishwashing soap. Many of these substances are unknown and researchers have yet to identify them. But some of them are of particular concern, in particular photocatalysts: these are toxic substances that are known to have potentially harmful effects on the health of living organisms. Scientists also discovered a variety of fabric softeners, antioxidants and mold-releasing agents used to make plastics, as well as diethyltoluamide (DEET), the active ingredient in mosquito repellent sprays. “What is released the most after washing in the washing machine are soapy substances, Says Selena Tesler. (…) The most toxic substances we identified actually came after the bottle was in the dishwasher.“ According to her, it is likely related to the fact that passing the dishwasher corrodes the plastic.

Is water dangerous to health?

At the moment, scientists do not know whether the water in these bottles is dangerous to health. “Just because these substances are in the water does not mean that the water is toxic and affects us humans. Says Selena Tesler. But the problem is that we don’t know. In principle, it is not recommended to drink soap residues or other chemicals. Toxicological evaluations are underway to understand the effects of these residues on human health. When in doubt, says his colleague, Jan H. Christensen, he will now choose bottles made of glass or stainless steel.