Home Economy RaidForums, the most famous illegal data leak marketplace, has been hacked by Europol and the FBI 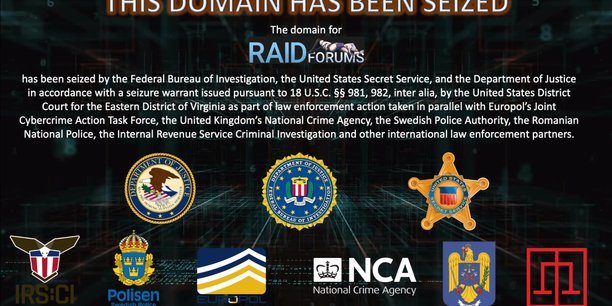 RaidForums data leak center will not return. The site, which has been offline since the end of February, now displays the message in English”This forum has been hacked‘, stamped with the emblems of the FBI, Europol and various Portuguese, British, Swedish and Romanian police forces.

A year-long coalition coordinated by Europol led to the publication oftourniquet operationKey: arrest.Forum adminAnd two of his associates, Define the press release Europol. from his side, US Department of Justice He adds that the main defendant, founder and director of RaidForums, is called Diogo Santos Coelho. A 21-year-old Portuguese, he will be behind the site since 2015.

If law enforcement does not mention his pseudonym, the founder is identified on the platform as “omnipotentDiscreet, indicated in his profile to live in London, he had agreed A unique interview with the specialized media The Record At the beginning of 2021.

The police announcement was expected, since RaidForums went missing on February 25. In the Telegram episode marked with lflash point researchersOne of the admins of the forum “Go” has already announced the takeover of the forum, calling on users to change their passwords to cover their tracks.

During the 7 years of its existence, RaidForums Forums has established itself as the most followed forum for exchanging data leaks, with hundreds of thousands of subscribers. It should be noted that unlike other more specialized cybercrime forums, this one has been well established. All it took was a Google search to find it, and all of its content was visible to any visitor. On the other hand, it was necessary to pay or participate in discussion forums to download documents placed on the Internet.

This unparalleled appearance made her play a special role in the news, as she was closely observed by researchers and professional journalists. Almost all of the big data breaches ended up there, once they were circulated in more secret and hard-to-reach forums. The result: a forum post was leaked public and often made headlines.

The site’s users have particularly specialized in creating and selling a “collection list”, which are email/password combinations resulting from many leaks, very useful for trying to steal accounts. The US Department of Justice claims that the site contains more than 10 billion identifiers.

In addition to the data leak, the forum contained a very popular section devoted to pornographic content, or even a section for organizing “blows”, the name given to massive online harassment.

The disappearance of RaidForum is a new example of the change in the attitude of law enforcement towards the cybercriminal environment. International cooperation has never been greater, and it is paying off.