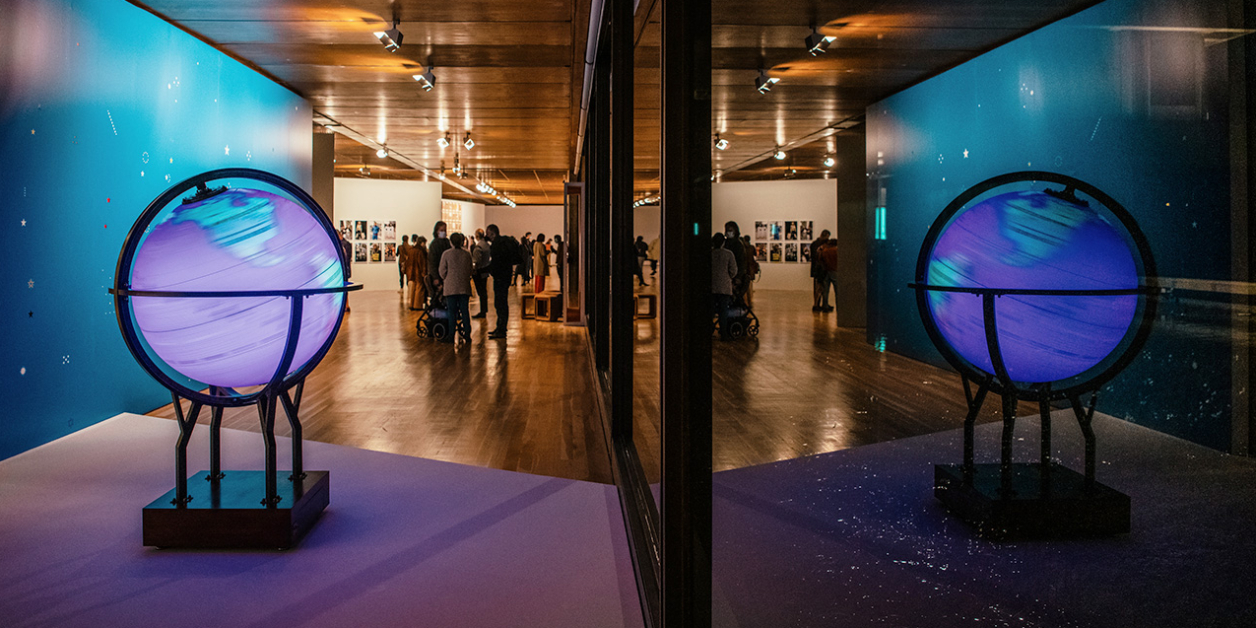 On the coffee table, a huge blue ceramic rod points proudly at the ceiling. On the ground, a large three by two meter drawing is a statue of the Marqués of Pombal (1699-1782), an important Portuguese politician, and slaveholder, attacked by a gymnast and a cherub with faces painted like those of Amazonian peoples. On the walls, sketches, photographs, some mold stains.

Bearded, with twinkling eyes, a piece of coral hanging around his neck, Angolan-born artist Marcio Carvalho enthusiastically presents his work in his small workshop in Lisbon. There is seriousness in his drawings mixed with humor and a little provocation, too, in a country that is always gargling about its past, its explorers, and its “discoveries.” It is also for this reason that curator Antonio Bento Ribeiro has chosen two drawings by Carvalho to appear in “Europe Oxala”, the exhibition that takes place at the Fondation Gulbenkian in Lisbon until August 22, after passing through Marseille (Museum) and before opening in Tervuren (AfricaMuseum).

Taken from the “Falling Thrones” series, the works featuring Marcio Carvalho represent, if you will, combat scenes. In the beginning, Mozambican feminist and independent activist Josina Abetar Muthemba Machel dressed as a judoka and performed an ippon on Portuguese King Joao 1Verse. In the second, it is Patrice Lumumba, also in a judoka outfit, who makes the Belgian king flutter with a villain memory Leopold II. Either way, historical European figures were drawn in black and white from very real equestrian statues.

“I like to use the judo image, because in this martial art, we use the strength of the opponent to gain the advantage,” the artist explains. We must take power from power systems. But demolishing a monument, which I think is a great artistic performance, cannot be replicated. By drawing with statues of colonists or slave traders placed in public spaces, I try to get everyone to question the way we interact with public things. I am trying to push communities to rethink shared space for a better life together. »

Fine Arts: Museum of Africa, a Belgian history on colonialism

“Falling Thrones” – more than a hundred drawings of various sizes – systematically depict real statues of controversial historical figures, in black and white, in the face of athletes of various Olympic disciplines drawn in color. “The series illustrates well what a creative approach to colonial history could consist of,” the curators wrote in their catalogue. This project uses the Olympic Games and their power structure to evoke, in the style of athletic rivalry, the history of these oppressed peoples who are a matter of remembering: each representative athlete represents a woman or a man. Fight against colonialism. Referees. A rare element in this type of approach, the humor displayed by the artist. For him, statues symbolically glorifying slave owners or colonists should be torn down, but kept in public so that no one is forgotten.

Memories for the future

This is the approach that Antonio Pinto Ribeiro has advocated for many years. He did this notably with the Gulbenkian Foundation’s “Proximo Futuro” program at the end of the 2000s, and then as event coordinator for the “Lisbon Ibero-American Capital of Culture” in 2017. That year, he had dared to install the “decolonial An exhibition in the heart of the Padrão dos Descobrimentos (Monument to the Discoveries), a symbol of the Salazar style erected in the 1960s in the Belém region to commemorate the Portuguese navigators of the 15th and 16th centuries.

A real provocation: “The discoveries in Portugal are sacred”, explains Marcio Carvalho. If we take them away from the Portuguese, it is as if we are depriving them of part of their CV. Europe Oxala is part of the same kind of approach: a rereading of history in a country whose colonial and slavery past began in the 14th century and only ended between 1974 and 1975, after the fall of the dictatorship.

Slavery and Colonialism: When Portugal Emerges from Amnesia

“I have been given carte blanche to curate a contemporary art exhibition on the question of post-memory,” says Antonio Pinto Ribeiro, with Afro-European artists from three former colonial empires, Portugal, France and Belgium. The title “Oxala Europe” makes it possible to present the other, in Another place, oddity, with an optimistic dimension.“Oxala” is indeed a Colloquial derivation from “God willing”, with a diminished religious aspect. In this expression there is an openness to the future and hope. Indeed, even if some creations remain highly criticized, the exhibition on display within the walls of the Gulbenkian Foundation is far from a desperate indictment – like Judokas Marcio Carvalho.

The twenty or so artists shown come from immigration, second or third generation. While the former is primarily concerned with memories of the past, the latter seeks instead to produce “memories for the future”. “My family fled Angola and went into exile in Portugal,” says Marcio Carvalho. The food I ate and the music I listened to contrasted with what I experienced outside the family home. I was living in a duality that I tried to hide as best I could, until I discovered the tools to understand it. At some point, I realized that there were also African writers, thinkers and philosophers … “

With the help of Congolese visual artist Aimé Mbane and French-Algerian visual artist Katia Camili, Antonio Bento Ribeiro brings together creatives who, each in their own way, return to issues of memory specific to “Afro-People” while expressing a universal message. Thus, the Malagasy Malala Andrialavidrazana is like Faisal Buqraish, French Algerian Dexterously grasped the territorial issue. The first with its montage of ancient maps “lively and vibrant paintings in which different eras and representations merge”. The second with “optional refinement”, wonderful “the uniform blue sky studded with a myriad of stars of various shapes, colors and arrangements” which is “an enlarged version of a double dictionary page representing the flags of the nations of the world, covered by the blue-coloured artist who preserved only the stars of the national ensigns”.

Free Zone, the exhibition that plays with borders at the Institute of Islamic Cultures in Paris

As Antonio Pinto Ribeiro points out, “Cartography has always been an essential tool of colonization. The resources plundered during the colonial period are still being exploited, often by foreign companies. The blue rod painted by Marcio Carvalho in the style of azulejos, which is not in the exhibition, is not Nothing but a scathing and humorous criticism of these deadly and manly countries that wanted to subjugate the world to their desires, as they erected here and there flags and monuments.

If the so-called “decolonization” issue has been at the center of controversy for several years in France and Belgium, Portugal is still lagging behind in this area. “Europa Oxala” is another step towards a better understanding of the past, a nice reflection on long-held certainties. According to Monica de Miranda, who also has Angolan roots and works on “The Postcolonial Geography of Lisbon”, this memorial work belongs above all to the children of this complex history of domination and resistance. “We spend a lot of time complaining about not being on the date, when we are the story “, Says.