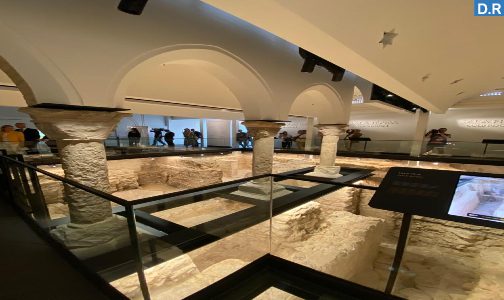 The event took place particularly in the presence of Portuguese Foreign Minister João Gómez Cravenho, Portuguese Minister of Culture, Pedro Adao e Silva, Mayor of Lule, Vitor Alexo, and Morocco’s Ambassador to Lisbon Othman Bahnini. As well as a number of Moroccan university officials. The construction of the Islamic baths, the first of its kind to be documented archaeologically in Portugal, is divided into several distinct spaces, approximately 120 square metres, with three parallel naves of a rectangular plan.

The building underwent various repairs during its occupation until the 14th or early 15th century, as evidenced by the partial replacement of the floor and the layers of different types of mortar.

Abandoned as a public building, the baths became a landfill until the 15th century, when the space was occupied by the Barreto family (lords of the Quarteira region) who built their palace on the ruins of the bathhouse.

The space has undergone major changes.

During the 1940s and 1950s, the spaces were subdivided and put to various uses, most recently as a warehouse, until the building was acquired by the Lule municipality in 2006.

The space was a target of archaeological work between 2006 and 2019, always with the goal of preserving the remains that had already been identified.

Since March 2020, this space has been under construction for the expansion of the archaeological complex that will integrate the Municipal Museum accredited by the Portuguese network of museums, the future cultural district, whose architectural project bears the signature of architect Vitor Mestre.

In a speech during the opening ceremony, Mr. Bahnini noted that these baths, which will soon be declared a national monument, testify to the presence of the Almohad dynasty in Portugal, which ruled Morocco in the 12th and 13th centuries, and whose influence extended from North Africa to the borders of the Sahara.

He added, “By inaugurating these baths, today we celebrate once again a rich saga of our common history, of what united us in the past, and which forms the historical basis on which the relations between Morocco and Portugal are based.” Ambassador.

In this sense, the Moroccan diplomat pointed out that “the promotion of this common heritage shows the extent of what our countries have long known with intelligence, wisdom and insight to overcome the vicissitudes of history to make it an ancient and rich civilizational heritage, serving an exemplary relationship in all respects,” noting that “the depth and richness of our common cultural heritage. It is the fruit of several centuries of exchanges and interaction between Portugal and Morocco.”

“If the traces of the passage of the Almoravid and Almohad dynasties in Portugal are noticeable, as evidenced by the remains of the baths of Luli, the Atlantic Moroccan coast from Tangiers to Dakhla is rich in Portuguese heritage, the most famous and unique of its kind in the world is the water reservoir in Mazagan, the new, currently, stated Mr. Bahnini, explaining that Portuguese heritage is “strongly influenced by the presence of Arabs – especially North Africans carried by Moroccan dynasties”.

“In a contemporary world marked by full-blown instability, rising tensions and the re-emergence of the old demons of ignorance and hatred, countries like Morocco and Portugal, which have a rich common past, exemplify a single path,” the ambassador said.

Other testimonies, notably those of the Portuguese Minister of Foreign Affairs and Culture and the Mayor of Lule, emphasized the importance of preserving the common memory by preserving historical monuments that testify to the depth of the relations that linked the two countries. the centuries. Portuguese officials also welcomed the excellent relations of cooperation, neighborliness and friendship that unite their country with Morocco.

See also  “I cried. It was the hardest thing in my career…”