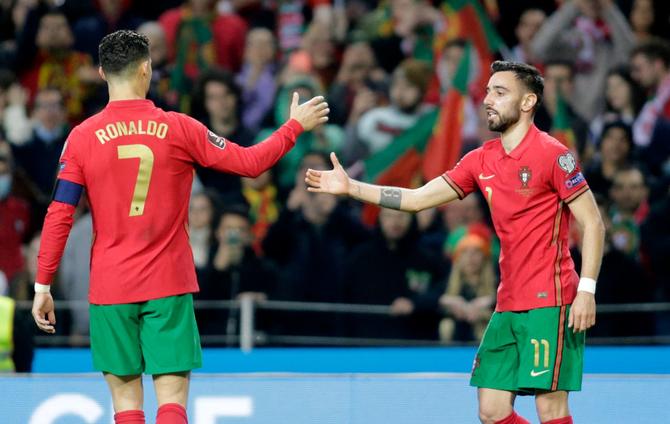 The 2016 European champion took the lead a little after half an hour with a goal from Bruno Fernandes, sent by Cristiano Ronaldo (32, 1-0). The attacking midfielder Manchester United managed the first half by scoring again in the middle of the second half (65, 2-0). The Lusitanians will participate in the eighth World Cup finals in their history, the 12th major tournament in a row.

Facing the unrestrained Macedonians, the Portuguese were slow to get a first chance. As is often the case, the ‘CR7’ unleashed hostilities. The five-time Golden Ball, well served by Ottavio, led to a superb cross shot from the left, but shaved the right upright of the opposing cages (14th place).

Macedonia responded shortly after with a shot from Ezjan Alewski to the side (20). Then Diogo Jota thought that he opened the scoring from a corner kick, and finished the head of the Liverpool striker a little over (24). Then Portugal scored a 100% ‘Made in’ Manchester United goal. Bruno Fernandes intercepted a poor Macedonian pass and relied on Ronaldo to give him the ball in the race, closing the playmaker with a clear shot from close range (1-0, 32). Aside from a long shot by Joao Cancelo just outside the goal (45+1), Fernando Santos’ men didn’t have another chance to break before the break.

An offensive silence that shows the Macedonians’ ability to defend well even when they dominate the game, such as the nation’s stunning victory in the FIFA rankings 67 against Italy (1-0), last week in the semi-finals. Returning from the locker room, Bruno Fernandes again tried his luck, but his shot outside the area was captured by the goalkeeper of the Balkans, Stoll Dimitrievsky (52nd).

It was just a reprieve, as the attacking midfielder finished off a superb Portuguese counter-attack with an unstoppable recovery from Diogo Jota’s cross (66, 2-0), to finally seal his country’s World Cup qualification in Qatar (November 21-December). 18). A beautiful revenge for the 27-year-old, who was often uncomfortable with the Portugal shirt, unlike the performance of his club.

After this second goal, the Lusitania managed to calmly manage the result, leaving no chance for the Macedonians and reviewing their offensive fleet with the start of Rafael Liao and Joao Felix. Despite this freshness in attack, they failed to score the third goal that would have given an air of correction to their victory over the valiant but very limited Macedonia.

Cristiano Ronaldo, who did not score in the selection for the fourth meeting in a row, will be able to console himself with the opportunity to enter the very closed circle of players who played the last five stages of the World Cup.