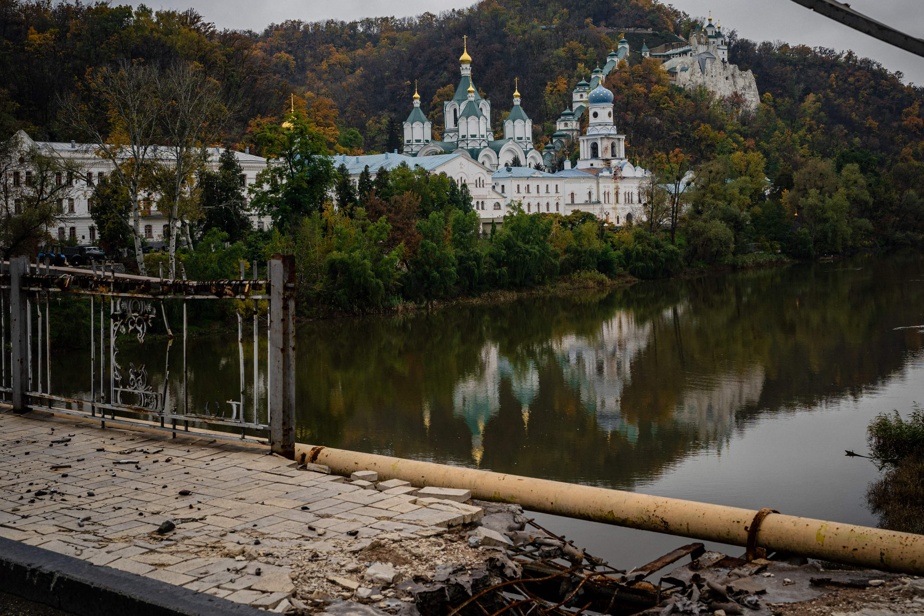 (Sviatoguirsk) At one end of the queue to distribute a hot meal, neighbors avoid each other, in the ruins of what remains of the spa town of Sviatoguirsk in eastern Ukraine.

“Four days before the liberation of the city, on September 7, I told the Russian soldiers that I had a car that was used by the Ukrainian forces,” Lyudmila Orlova, 61, bursts into tears.

They came in the evening with their guns, were drunk and interrogated me for 30 minutes. They brought everything back home,” continues MI Orlova.

“But I made the car unusable and they couldn’t touch it,” she says, welcoming the proud 20-year Ukrainian teacher to this Russian-speaking, pro-Russian stronghold.

Her neighbour, Yevdokiya Yarovaya, 76, claims that she “was not in contact” with the occupying forces, which she had seen only several times, to receive supplies brought by Russian soldiers in these cut-off villages.

And she insists that “food is more important than anything else,” she says without answering a question if this help is conditional on the Russians to denounce.

“There is a lot of anger and resentment, we have not yet overcome what we have been through and I would like more than anything that this should not happen again,” concludes the old woman, clinging to trays of pilau, the traditional rice stew, which volunteers steam distribute to the frozen residents.

The mayor of Svyatogersk, Volodymyr Bandura, elected in 2020 from the pro-Russian “For Life” party, celebrated the arrival of the “liberators” at a press conference under the Russian flag.

He has since been the subject of a warrant from the Ukrainian authorities for “treason” and has not been found since their return.

In his stead, the military temporarily appointed a pro-Ukrainian figure in the city, who coordinated the civil defense.

Volodymyr Rybalky, who cuts the city in ruins, first of all tries to organize the survival of the population before winter and refuses to launch the “chasing collaborators” now.

Determining who cooperates or does not cooperate is the work of the SBU (Internal Intelligence Service) and the police. “If there are acts of treason, they will be dealt with in accordance with the current legislation,” he told AFP.

According to the April 2022 law, amended at the beginning of the war, a “collaborator” is punishable by 15 years to life imprisonment in the event of “death or severe consequences”.

Actions ranging from “assistance to the occupying armed forces” to “economic activity” are considered cooperation, but also the phrase “in public,” including on the Internet or in the media, about “the denial of the army of aggression suffered by Ukraine is a Ukrainian citizen.”

‘Neither terrorists nor separatists’

In Sviatoguirsk, the Orthodox Dormition Monastery focuses all the tensions. Her Holiness publicly demonstrated separatist positions during the 2014 conflict, and Ukrainians accused him of hiding fighters and weapons in the monastery.

This time, “the monastery tried to maintain a position that it presented as neutral, but we all know that they support Russia,” accuses Oleksiy Kashborovsky, a 46-year-old press officer of the Ukrainian Armed Forces, pointing to the vast green lantern. Religious site on the hillside.

See also  Extreme heat: a temporary respite in the future

At the entrance, the statue of the Virgin greets with only one hand. The second was torn to shreds.

At the height of the fighting, 400 residents of Svyatogorsk took refuge there, along with 200 monks and hermits. Despite orders to evacuate as the Russian forces approached, they all holed up and stayed.

“He raised a lot of questions about their loyalty,” said Private Kashporovskyi.

In the monastery garden, Reverend Theophane, 51 and the life of a Donbas miner before God’s call, shows the new graves of three monks who were murdered in May by shell fire on their cell.

According to him, this “hostile” perception comes from the complex loyalty system of the Ukrainian Orthodox Church to the Moscow regime, which openly supports the conquest of the Kremlin.

This “church union” of the two men was officially broken in May by Kyiv.

“Yes, we remember Patriarch Kirill of Moscow in our masses, but there were no terrorists, separatists or weapons here,” the priest asserts, saying that he prays every day for the “Ukrainian people”.