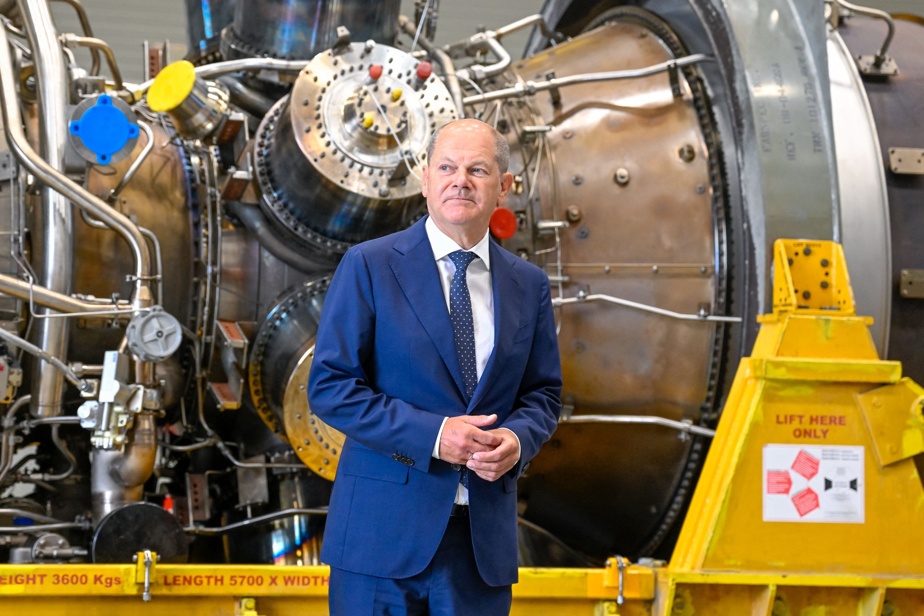 (Mulheim an Ruhr der) Olaf Schultz on Wednesday paved the way for extending the operating lives of Germany’s last three nuclear power plants, in the face of growing fears of an energy crisis linked to the gas stand-off with Russia.

The latest nuclear power plants are “only relevant to the production of electricity and only a small part of it”, but it “still makes sense” not to disconnect them from the grid as planned, the German chancellor said.

Germany decided in principle to phase out nuclear power at the end of this year.

However, the scarcity of Russian gas shipments to Germany, in the context of the war in Ukraine, has brought back to the discussion table the question of keeping the last power plants in operation for longer than planned.

Berlin must decide in the coming weeks based on ongoing experience, the second of its kind. “We will then draw our conclusions,” the chancellor said on a visit to Mülheim in Ruhr der.

And he headed to the site of industrial company Siemens Energy, where a gas turbine was recently repaired in Canada, with the goal of equipping the Nord Stream 1 gas pipeline connecting Russia with Germany.

But it is still currently blocked in Germany, and Berlin and Moscow differ on the reasons.

Olaf Schultz on Wednesday accused Russia of being responsible for obstructing the delivery of such equipment, without which the gas pipeline, according to Moscow, could not function normally. The “tube” has supplied only 20% of its gas capacity since mid-July.

He stressed that “there is no reason not to deliver” and Moscow should only “provide the customs information necessary for its transfer to Russia.”

Russian operator Gazprom accuses Siemens of not sending the necessary documents to allow the turbine to be restarted, which the company denies.

“The sanctions regime in Canada, the European Union and Great Britain as well as inconsistencies in the current situation regarding Siemens’ contractual obligations make delivery impossible,” he said.

Kremlin spokesman Dmitry Peskov denounced on Wednesday that “this tense and absurd situation is caused by Western restrictions and sanctions.”

Gazprom on Wednesday received the support of former German Chancellor Gerhard Schroeder, very close to the Kremlin and Russian energy groups, who has implicated Siemens.

Indeed, Berlin suspects that Moscow in this case is using turbines as an “excuse” for political pressure on Westerners in the context of the Ukraine war.

During the recent meeting with Gerhard Schroeder, President Vladimir Putin emphasized that it was “technically feasible,” due to the inability to fully utilize Nord Stream 1, to carry out gas deliveries via the Nord Stream 2 gas pipeline, “ready to use at any time,” he said. Peskov.

Under pressure from its allies, Germany ended up suspending – prior to its commissioning – the highly controversial pipeline, because it was to increase Europe’s dependence on Russian gas. This decision was made two days before the start of the Russian invasion of Ukraine.

Faced with the stagnation of the gas crisis, Germany, like many other European countries, is seeking to compensate for it with other sources of energy.

See also  Octogenarian with Alzheimer's is accused of killing his granddaughter

Questioning the year-end nuclear shutdown, which Angela Merkel decided in 2011 after the Fukushima disaster, would be a very strong political action.

The three nuclear power plants are still in operation – in Bavaria, Lower Saxony and Baden-Württemberg – vying for 6% of Germany’s net electricity production.

However, the question divides the government coalition, with the Green Party questioning, and the Liberals supporting the FDP.

Mr. Schulz justified his position by the fact that Germany should show solidarity “with other European countries whose power plants have been shut down”, as well as by slower development of renewable energies in Germany. provided that.

“This is especially true in Bavaria, which has made slow progress with the expansion of wind power,” he said, in a spear directed at this historically conservative-led region.