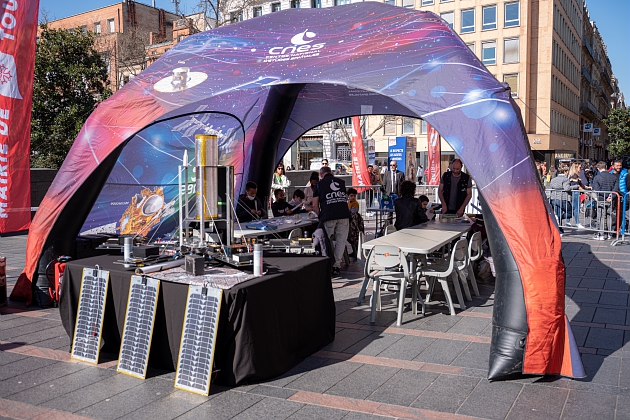 Opened last February, the season will revolve around key themes such as oceans, environmental protection, and inclusion values, and will also aim to bring together the youth of the two countries. “This program is an opportunity for the French National Center for Space Studies to disseminate and impart space culture, especially to young people, while having fun.”, Explains Natalie Ribeiro Vieira, France-Portugal Season of Communication coordinator, jointly with Amelie Gravier, Head of Bilateral Relations with Portugal at the French National Center for Space Studies.

This event is also an opportunity for the French and Portuguese space agencies to strengthen their cooperation, as evidenced by the diversity of joint-branded projects.

On the last 3/3, The first event happened in Toulouse The two space agencies were able to jointly present the upcoming space events for the France-Portugal season, while discussing the long-term sustainable cooperation that exists between the French National Center for Space Studies and Space Portugal. The event was held in the presence of representatives from Toulouse City Council, Institut Français, Portugal Space, CNES, Ciencia Viva (Portuguese Organization for the Promotion of Science among Young People) and Planète Sciences. after the words Planete Sciences . Organizers He introduced officials to entertainment provided to Portuguese schoolchildren aboard the Spatiobus during his Portuguese tour in March. Then the young Toulouse fans were able to spot them in the preview!

March 2022 – The Spatiobus in Portugal

Spatiobus was created by CNES, a roving tool for animation and science dissemination about space. For the first time in its history, Spatiobus has left France to go to Portugal where he is on a north-south main tour from 07 to 03/25/2022. in . format Ciencia Viva, Portuguese Scientific Mediation OrganizationSchool children are invited to participate in activities and experiences offered by Planète Sciences, a CNES partner. In the program, various activities such as building small satellites, precision paper rockets, but also oceanographic activities and a workshop for building Mars bases. All the adventures of Spacebus are To follow regularly on his dedicated blog !

March/May 2022 – Photo Gallery: French and Portuguese Coasts Under the Eye of Satellites

double exposure named “French and Portuguese coasts under the eye of satellites” It is organized in Bordeaux and Guimarães. Images taken by the French Pléiades and Portugal’s Geosat satellites are shown. “The purpose of the exhibition is to raise awareness among the general public about the protection of the oceans, their environment and biodiversity.” Says Natalie Ribeiro Vieira.

The exhibition will also show the importance of Earth observation tools to support environmental, but also social, scientific, economic and political issues.

October 2022 – Like a Student: An International Team in Weightlessness!

Each year, as part of the Youth Education Program, The French National Center for Space Studies is organizing the “Student Ideal” campaign, which allows student teams to conduct experiments in weightlessness on board an Airbus Zero G.

This year, with the aim of student collaboration between France and Portugal, the two space agencies have worked to bring schools and universities together in order to create international teams. The LOTUS project was selected, the result of a collaboration between ISAE / Supaero students and the Instituto Superior Técnico in Lisbon. The experiment will test models of original structures in microgravity. Students were able to meet during a virtual workshop on 16/12/2021. The Parabolic Flight Campaign will take place from 3-7/10/2022 in Mérignac, France.

EuRoc and C’Space are respectively education programs from Portugal Space and CNES. Both are intended to launch experimental missiles. As part of the France-Portugal season, the two agencies are pooling their communication efforts around campaigns planned in July for C’Space and October for EuRoc.

Today, Thanks to the France-Portugal season, both agencies are keen to promote the space and its usefulness to the general public. Natalie Ribeiro Vieira, ” This partnership with the Institut Français and Portugal Space meets the objectives of the CNES communication policy that has been implemented since the creation of CNES 60 years ago.. Thus, by increasing youth awareness of these technologies, the French National Center for Astronomical and Space Studies also encourages children and young people to study science, technology and engineering and try to encourage careers. These activities are also part of the CNES educational policy objectives.