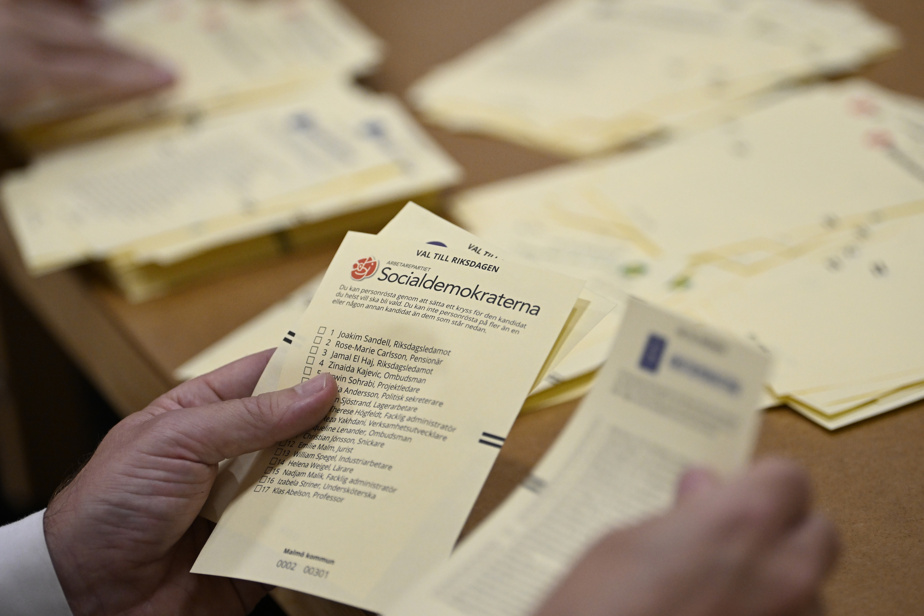 (Stockholm) Sweden is heading for a one-stroke victory for the far-right allied right after a tense election on Sunday, but the final result is not expected to be confirmed for at least three days.

According to partial results covering nearly 92% of polling stations, the bloc led by conservative moderate party leader Ulf Christerson would win an outright majority of 175 to 176 seats, compared to 173 to 174 for the left-wing bloc made up of outgoing Prime Minister Magdalena Anderson.

The biggest winner of the evening was the anti-immigration Sweden Democrats led by Jimmy Akesson, which broke a new record of 20.7% and became the leading right-wing party, but also Sweden’s second-largest party. .

“It smells so good,” he told his fused troops at his campaign headquarters.

Election night was marked by a rapid flight: while polls and preliminary results suggest the left will win by a narrow margin, rights have persisted as the count progresses and now appear to be on course to win.

Based on the votes counted around 1 am (11 pm GMT), the right-wing bloc (SD, Moderates, Christian Democrats and Liberals) will win 49.7% of the vote. The Left Bloc (Social Democrats, Left Party, Green Party, Center Party) will gather 48.8%. That’s only about 60,000 votes for the 7.8 million voters.

The Electoral College warned that the final result would not be known until Wednesday, and that Swedes abroad and some advance votes had not been counted before.

“We’re not going to get a final result tonight,” declared Prime Minister Magdalena Anderson, who didn’t throw the towel well for her party, more than 30%.

“Swedish democracy must take its course, all votes must be counted and we will wait for the result,” said the 55-year-old incumbent leader, who had been hoping for a third term on the left on Sunday night.

The Swedish traditional right, backed by conservative candidate for prime minister Ulf Christerson, had never considered ruling until this legislative election with direct or indirect support from the Sustainable Development Party.

Long a pariah, the nationalist and anti-immigration party led by Jimmy Akeson now finds itself in a position of strength.

“It says a lot about how far we’ve come, how everyone laughed at a small party, today we are the second largest in Sweden,” the 43-year-old far-right leader told his frenetic supporters.

He reiterated “our ambition to be in the government”, although the party is likely content with supporting the new majority in parliament.

Massive immigration and deadly score-settlement among criminal gangs in the Swedish suburbs have fueled the far-right party in recent years. These themes, along with rising fuel and electricity prices, dominated the campaign.

Entering Parliament for the first time in 2010, with 5.7% of the vote, the SD party has continued to advance since then and now exceeds 40% in some municipalities, particularly in the south of the country.

The victory of the far right backed by the far right means a new political era for Sweden, which is due to take over the rotating presidency of the European Union on 1Verse January and the completion of its historic candidacy to NATO.

For the investment to take place, the Swedish Prime Minister must not have 175 or more votes against, but not necessarily have an absolute majority in his favour.