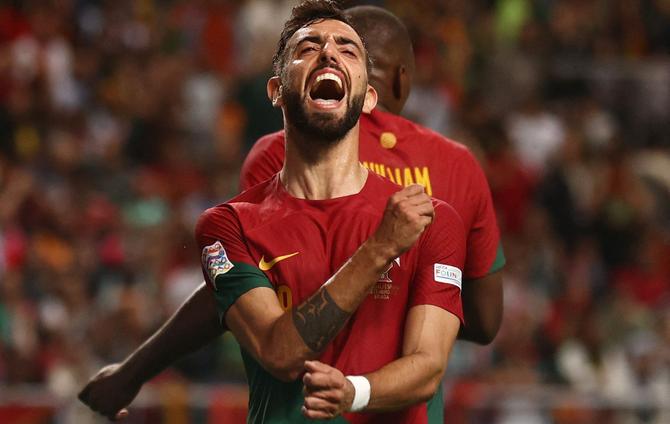 The Lusitanian metronome began his relationship with the round ball in Queves, a town in Metropolitan Porto (North), in the midst of the bars of social housing and in the courtyard of his primary school. “He was really experienced, because he played with us who was two years older than him or with his older brother. He had personality, he didn’t let it go,” Lucio Fernandez, his namesake and former companion, recalled.

With Lucio’s help, Bruno Fernandez, who is 28 today, is testing at a modest local team from the city of São Mamede de Investa, whose old facilities lie between a residential area and a motorway junction. “At the end of the training, I immediately said to the club president: + This kid, he must stay +. He had talent and we had to take advantage of it,” recalls Sergio Marquez, first coach of “BF8”.

His parents do not have the permit, FC Infesta managed to take him to training. At eight years old, little Bruno has so much talent that the coach decides to dedicate a one-on-one session to him every week. “Despite his age, he was hard working, he had a lot of willpower. He had an incredible ability to learn. What I taught him during the week, I showed him from the weekend games,” confirms the coach of the club in the sixties, whose clay courts have been replaced At the time with flawless artificial turf.

If Bruno Fernandes shines today as an attacking midfielder, this is how he got his start in defence. “Even if positions were not decided at this age, I would play with him as a central defender, because he was one step ahead of the attackers. (…) When the game was easy, I let him play in the middle, ”says Sergio Marquez, who continues to call his former winger His other name: Borges. A season spent in FC Infesta, Bruno Fernandes is already in demand by the two largest clubs in the region: FC Porto and FC Boavista. His family finally decided on Boavista, who offered him minibus transportation for training.

Upon his arrival, the young prodigy joined Porto’s satellite team, ADR Pasteleira. Coach Antonio Ribeiro gets there when Bruno Fernandes turns 15. “When I arrived at the club, Bruno’s team hadn’t won any games. He was playing in the center back position and I decided to put him in the playmaker position. From there we started winning. He was scoring a lot of goals,” he explains. The 63-year-old coach. “He was thin, but he did not hesitate to set foot (…) Off the field, he was a very modest teenager. On the other hand, on the field he often quarreled because of his strong personality,” he details.

At the age of 17, Bruno Fernandes returned to Boavista and found himself promoted to one age group at the request of his then coach, Joaquim Silva, nicknamed “Martelinho”, the former winger of the champion Portuguese team in 2001. “Before becoming his coach at Boavista, I’ve faced him many times, he was the kind of player who deserves special attention, because he was the best in his team,” explained Martelho.

“In addition to the quality of his game or his physical abilities, I also felt his leadership,” he says. The 2011/2012 season is coming to an end and it seems that Bruno Fernandes is about to join the professional team of Boavista, but the club is overtaken by a corruption case that has shaken the entirety of Portuguese football: it finds itself wrecked and demoted to third place. section. “His dream was to make a name for himself in the professional team, to play in Serie A. Given the club context, he must have felt that he could no longer achieve that goal and that he had to take a risk at Novara, the Italian second division team that recruited him. For 40,000 euros, the obstacle course started again.

After Udinese and Sampdoria in Genoa, he returned to Portugal to explode at Sporting, then arrived at Manchester United’s “theater of dreams” in January 2020. “All the credit goes to him, because he was alone in Italy, very young, away from his family, without knowing Language, comments Martelinho. It was not easy, but he managed to grow thanks to the strength of his ambition.